After nearly a decade in legal wrangling, a billion-dollar class-action lawsuit over Apple's iPod music players heads to trial on Tuesday in a California federal court. Attorneys for consumers and electronics retailers claim Apple Inc. used software in its iTunes store that forced would-be song... 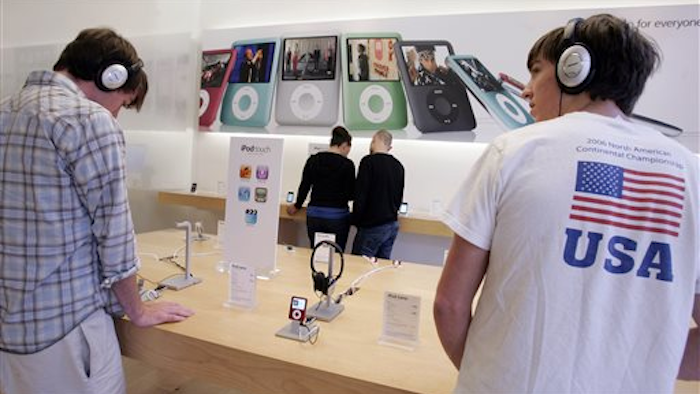 After nearly a decade in legal wrangling, a billion-dollar class-action lawsuit over Apple's iPod music players heads to trial on Tuesday in a California federal court.

Underscoring the case's hoary origins — it was filed in January 2005, which is eons ago by Silicon Valley standards — one of the key witnesses will be legendary Apple CEO Steve Jobs, who died in 2011 but will be heard in a videotaped deposition.

"The fact that this case is still going 10 years later is a sign that technology often outpaces law," said Mark Lemley, a Stanford law professor.

The case harkens back to the early days of digital music and portable devices, when Apple quickly became the world's biggest legal seller of downloaded songs after launching its iTunes store in 2003. By agreement with major record companies, which were wary of unauthorized copying and file-sharing services like Napster and Kazaa, Apple encoded the songs sold through iTunes with "digital rights management" software that prevented unauthorized copying. The same software, known as FairPlay, was also built into iPods.

But Apple's FairPlay was incompatible with anti-copying code used by other online music sellers, such as the RealPlayer Music Store operated by RealNetworks, an Internet streaming company based in Seattle. As a result, songs from rival online stores could not be played on iPods, and songs purchased on iTunes could not be played on competing portable devices, including Microsoft's Zune and Diamond Multimedia's Rio music player.

Music fans chafed at the restrictions. RealNetworks soon introduced coding that allowed songs purchased from its store to be played on iPods and other devices. But Apple blocked the RealNetworks code, known as Harmony, when it released an update to the iTunes program in 2004. Real tried again with a new version of Harmony, but it was blocked by another iTunes update in September 2006.

The plaintiffs contend that music lovers were effectively locked into using iPod players, because they could not easily switch their music collections to other portable devices. This prevented competition that would have driven down iPod prices, plaintiffs say. Apple sold iPods at prices ranging from $79 to $349 in the fall of 2006. It would sell nearly 150 million of the devices over the next two and a half years, during the period covered by the lawsuit.

Apple stopped using the restrictive FairPlay code in early 2009, after record companies shifted strategy to embrace the growing popularity of digital music. More recently, the music industry has moved toward a streaming-focused business model rather than selling copies of songs for individual download.

But attorneys for the plaintiffs maintain that iPod buyers are still entitled to compensation for past harm. Although iPod prices have fallen — models that come with more memory now retail for $49 to $299 — plaintiffs' attorney Bonny Sweeney said in an interview: "Prices always go down in the tech market. But the prices were still higher than they should have been."

If their attorneys prevail, the class of plaintiffs who would be eligible for damages include consumers and some retailers who bought iPods between Sept. 12, 2006 and March 31, 2009.

Apple declined comment outside court, but its attorneys have argued that Apple competed fairly by designing its iTunes updates to provide legitimate security protection and a host of other features desired by consumers. Apple lawyers William Isaacson and Karen Dunn also contend in court papers that the plaintiffs' economic expert used flawed assumptions to conclude that the software inflated iPod prices.

The Cupertino, California company has said it paid no attention to online rivals when it set the price of iPods. Sweeney, however, said Apple was "furious" with RealNetworks when it released the Harmony software. She said Jobs' testimony will show Apple's reaction.

Aside from its focus on technology no longer in use, legal experts say the case is noteworthy because most antitrust claims get tossed by a judge or settled out of court.

"Only a very small handful of antitrust cases go to trial," said University of Iowa law professor Herbert Hovenkamp. It's difficult to prove consumers were harmed in such cases and the outcome often comes down to a duel between economic experts, he said.