The court ordered prison terms of three years for Kikukawa and the auditor, and two-and-half years to the third executive — all suspended up to five years, meaning they won't be imprisoned. Olympus was fined a maximum 700 million yen ($7 million). 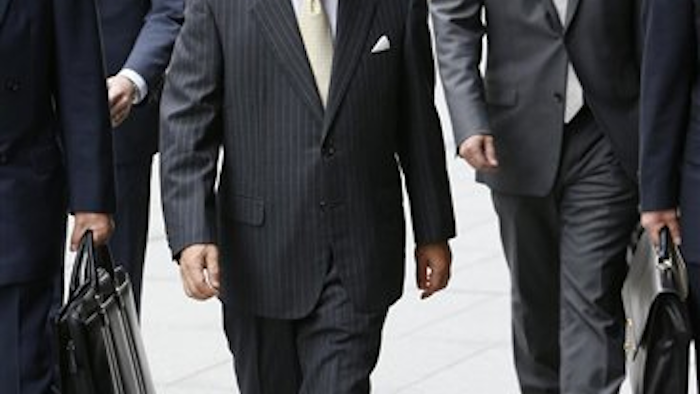 TOKYO (AP) -- A Tokyo court convicted Olympus Corp.'s former president and two other executives Wednesday for a yearslong cover-up of massive investment losses that damaged the credibility of corporate Japan.

The court ordered prison terms of three years for Kikukawa and the auditor, and two-and-half years to the third executive — all suspended up to five years, meaning they won't be imprisoned. Olympus was fined a maximum 700 million yen ($7 million).

The company "systematically" carried out the cover-up in which executives took advantage of their authority and financial expertise, he said.

"Their failure to report the losses and falsification of financial statements is a totally unacceptable act for a socially responsible company," the judge said.

Kikukawa and the auditor, Hideo Yamada, played a key role in the cover-ups but the court decided not to send them to prison because of their age, expressions of regret and the social punishment that they have since faced.

Prosecutors had demanded five years in prison for Kikukawa, 72, who also served as chairman at Olympus, a camera and medical equipment maker.

The scandal emerged in 2011 when the company's British chief executive, Michael Woodford, raised questions about dubious payments for financial advice and acquisitions. He was subsequently sacked.

Woodford became a hero in Japan, where outspoken people are rare and whistleblowers are routinely treated as outcasts.

Olympus is suing Kikukawa for damages. The company has also investigated the scandal and acknowledged various fraudulent schemes.

The scandal tarnished the reputation not only of a once prized manufacturer but also of Japan Inc. as the nation struggles to improve its corporate governance.

Olympus barely avoided being delisted from the Tokyo Stock Exchange after the scandal surfaced by filing corrected earnings from the previous five fiscal years.