For Nokia, it comes down to this: Is Microsoft's new phone software going to get it back in the smartphone race, or is it going to be too late? After being the top seller of cellphones in the world for 14 years, Nokia failed to meet the challenge when Apple in 2007 introduced the dazzling iPhone that caught the imagination of design-conscious customers and rattled mobile markets. 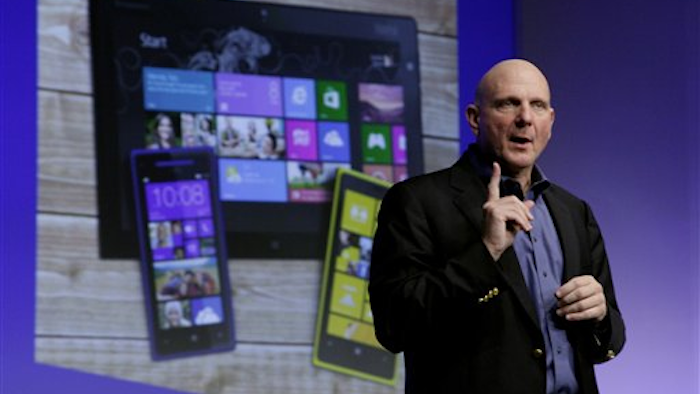 HELSINKI (AP) -- For Nokia, it comes down to this: Is Microsoft's new phone software going to get it back in the smartphone race, or is it going to be too late?

After being the top seller of cellphones in the world for 14 years, Nokia failed to meet the challenge when Apple in 2007 introduced the dazzling iPhone that caught the imagination of design-conscious customers and rattled mobile markets.

The Finnish company hit a downward spiral that has led to shrinking sales and market share, plant closures, thousands of layoffs and downgrades by credit agencies to junk status.

On Friday, research firm IDC said that in the July-to-September period, Nokia slid for the first time off the list of the top five smartphone makers in the world. It's still the second-largest maker of phones overall, but sales of non-smartphones are shrinking across the industry, and there's little profit there.

The ailing company's CEO, Stephen Elop, sees Microsoft's new Windows Phone 8 software as a chance to reverse that trend, describing it as a catalyst for the new models.

On Monday, Microsoft Corp. is hosting a big launch event for the software at an arena in San Francisco. The first phones from Nokia, Samsung and HTC are expected to hit store shelves next month.

The launch of Windows Phone 8 follows on the heels of Windows 8 for PCs and tablets, which Microsoft released Friday. That operating system has borrowed its look from Windows Phone, meaning Microsoft now has a unified look across PCs and phones — at least if people take to Windows 8. The company has also made it easy for developers to create software that runs on both platforms with minor modifications.

Analysts are calling this a make-or-break moment for Nokia.

"Nokia is placing a huge bet on Microsoft and if the gamble doesn't pay off, the losses can be high," said Neil Mawston from Strategy Analytics, near London. "It's putting all its eggs in one basket and that's quite a high-risk strategy."

In February last year, Nokia announced it was teaming up with Microsoft to replace its old Symbian and next-generation MeeGo software platforms with Windows. This move was made in the hope that it would rejuvenate the company and claw back lost ground.

Eight months later, they produced the first Nokia Windows Phone. Consumers didn't warm to it, and it soon became clear that these phones, based on Windows Phone 7, were going to become obsolete. They can't be upgraded to Windows Phone 8. Lumia sales slumped to 2.9 million units in the third quarter after reaching 4 million in the previous three months.

"Retailers withdrew marketing and promotion because no one wants to sell customers a device that ages in a few months," says Michael Schroeder, analyst at FIM Bank Ltd. in Helsinki.

"Had there been a seamless transfer to Windows 8 from the old (Lumia) devices, sales figures would have been much higher last quarter."

Mawston gives Nokia until April to prove it's still in the race.

"If Nokia does not have more than 5 percent of the global smartphone market by the end of the first quarter 2013, alarm bells will be ringing," Mawston said.

Analysts estimate Nokia's current global smartphone market share to be some 4 percent — down from 14 percent a year ago. Meanwhile, uncertainty clouds its new venture with Microsoft.

"We're a bit in the dark here," Schroeder said. "Right now we can't really say anything about Nokia's future. Everything depends on how the new devices are received in the market."

Nokia says its Lumia 920 and 820 phones are just the beginning of a new range of Windows Phone 8 devices, but early evaluations suggest they lack the "wow" effect necessary to make a dent in the smartphone market.

Also, Windows Phone 8 lags behind in the number of third-party applications available. There are some 100,000 available. Google's and Apple's stores have six or seven times as many.

"It's a perception thing really," Mawston of Strategy Analytics said. "Like in supermarket wars, if you have a store with lots of shelves with lots of apps, then consumers will choose you over a smaller store that has a smaller offering — even if you can't use all those apps."

Analysts expect 700 million smartphones to be sold worldwide this year. While network operators and retailers may welcome a third software system to challenge the dominance of Apple's iOS and Google's Android, it is the consumer who will ultimately decide Nokia's and Windows Phone 8's fate.

Beside the smartphone challenge, Nokia is feeling the pinch in the lower end with manufacturers in China and in Asia producing cut-rate non-smartphones — Nokia's former domain. Earlier this year, Samsung overtook it as the world's No. 1 mobile phone vendor, ending Nokia's reign that peaked in 2008 with a 40 percent market share.

"Dumb" phones continue to be the backbone of Nokia operations, including in India where it's a top seller. With strong and extensive distribution networks and a brand well-known in emerging markets, all might not be lost for the company that grew from making paper and rubber boots to being the biggest manufacturer of cellphones.

Mawston says that in theory, Nokia and Microsoft have a good chance of success as they offer an across-the-board system that stretches across home computers, mobiles, laptops, tablets as well as in the office, backed by Nokia's strong distribution and hardware and Microsoft's multi-platform software.

"If they can exploit that underlying market platform ... and tie it all together in a good hardware portfolio, then potentially Microsoft and Nokia could be a very, very strong partnership — a bit like bringing together Batman and Robin," Mawston said. "But, in practice, whether they can execute on that reality still is a great unknown and remains to be seen."