Bill Moggridge, a British industrial designer who designed an early portable computer with the flip-open shape that is common today, has died. He was 69. Moggridge is credited with the design of the Grid Compass, a computer that had a keyboard and yellow-on-black display that sold for $8,150 when it was released in 1982. It was encased in magnesium and seen as rugged, and was used by the U.S. military. 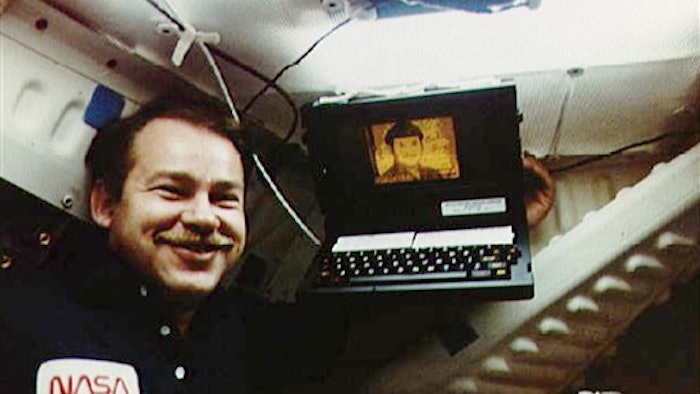 In this June 18, 1985 photo made available by NASA, Astronaut John Creighton poses with the onboard Graphical Retrieval Information Display (GRID) computer, which displays a likeness of the character Mr. Spock from Star Trek. Bill Moggridge designed the GRID computer. (AP Photo/NASA)

NEW YORK (AP) — Bill Moggridge, a British industrial designer who designed an early portable computer with the flip-open shape that is common today, has died. He was 69.

The Smithsonian's Cooper-Hewitt, National Design Museum said Moggridge, its director since 2010, died on Saturday from cancer.

Moggridge is credited with the design of the Grid Compass, a computer that had a keyboard and yellow-on-black display that sold for $8,150 when it was released in 1982. It was encased in magnesium and seen as rugged, and was used by the U.S. military.

The computer made its way into outer space aboard the Space Shuttle Discovery in 1985.

Although there were many portable computers being developed around that time, Grid Systems Corp. won the patent for the clamshell design with the foldable screen hinged toward the back of the machine, said Alex Bochannek, a curator at the Computer History Museum in Mountain View, Calif.

Moggridge pushed for this foldable design when it was realized the flat-panel screen, keyboard and circuitry could all fit snugly together.

"In terms of the industrial design of the enclosure, Moggridge was instrumental in proposing that," Bochannek said. "He came up with that particular form factor."

Until that point, portable computers resembled portable sewing machines that weighed more than 20 pounds and had a big handle, he said.

It was after using the machine that Moggridge's ideas about design began to change, Bochannek said. His work began to focus more on how people interacted with devices, rather than just making sure they were enclosed well.

"Beloved by the museum staff and the design community at large, Bill touched the lives of so many through his wise council, boundary-pushing ideas and cheerful camaraderie," said Caroline Baumann, associate director of the museum, in a statement.

He is survived by his wife of 47 years, Karin, and two sons Alex and Erik.