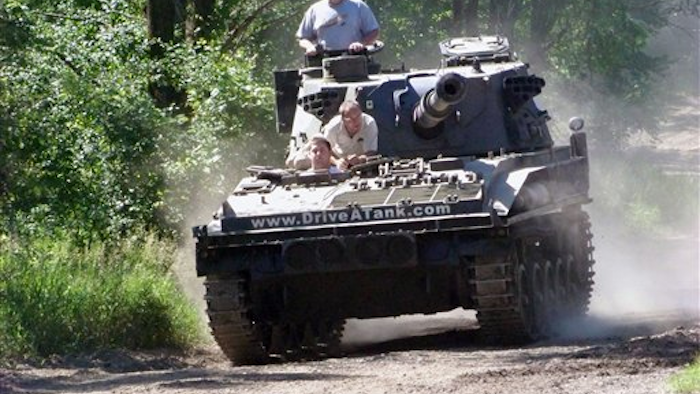 In this photo made June 9, 2012, Nick Walker of Amboy, Indiana drives a tank in Kasota, Minn., while his father Brad Walker looks out from the turret and Drive A Tank owner Tony Borglum sits behind him. (AP Photo/Jeff Baenen)

KASOTA, Minn. (AP) — For anyone who ever has been stuck in traffic, it's a tempting fantasy: If only you were driving a tank and could roll over everything in your path.

Some drivers are now flocking to an out-of-the-way spot in southern Minnesota to turn that vision into metal-crunching reality.

A business named Drive-a-Tank offers drivers the chance to pilot surplus military tanks and other armored vehicles around an old limestone quarry and smash junk cars like an action movie hero.

"It was awesome. I mean, controlling that machine, it's incredible," said Jacob Ostling, 19, of New Canaan, Conn., among the customers who took a turn under the turret on a recent Saturday and flattened a car in an explosion of glass.

Owner Tony Borglum, a construction and heavy equipment contractor, opened the tank park three years ago after seeing similar attractions during a visit to England. He said he knew it would fit nicely into American culture — a more visceral version of what millions of guys are doing in video games anyway.

He began buying up old Cold War-era surplus and now has 11 armored vehicles available for use on a 20-acre site near this town 50 miles southwest of Minneapolis. Customers spend hours churning up and down a hilly, wooded course, getting a firsthand sense of what armored warfare might be like.

"It's not as glorious as it looks like on TV," said Borglum, a short-haired 25-year-old who wore camouflage pants, a tan polo shirt and boots at the session.

But it satisfies the curiosity of those who have watched tanks in war movies.

"It was very realistic," agreed Brad Walker, of Amboy, Ind., who brought his 21-year-old son, Nick, for an outing before the young man got married. "It kind of gives you an idea exactly how hard that job is." Nick Walker, who squeezed his 5-foot-11, 230-pound frame into the cramped compartment, added, "It's not a big person's job."

Drivers sit in the small space in front between the tracks and navigate by looking out the hatch. "It's very noisy. Lot of vibration. Kind of warm but not uncomfortable. Took a little getting used to the maneuverability, but it's just ... a blast," said customer Marvin Bourne.

A basic package that includes driving a tank and shooting a machine gun costs $399, with more expensive options for driving several models and shooting other weapons such as assault rifles. Drivers who want to smash a car pay an additional $549; for about $3,500, a customer can drive a tank through a trailer house.

Learning to control the lumbering machine with its two steering sticks takes only a few minutes. It was "easier than I expected," and "an awesome Christmas present," said Bourne, 58, an insurance man from Richmond, Va., who brought his wife, Karen, along as passenger. He was among several visitors who had a gotten a tank ride as a gift for a special occasion.

Borglum said his tank park wasn't the first in the United States but he knows of no others still operating. Event coordinator Kessa Baedke said more than 600 packages have been sold this year.

One of the attractions on display is a British Chieftain Mark 11 featured in the 2002 Matthew McConaughey dragon invasion movie "Reign of Fire." Another Chieftain nicknamed Larry, weighing 60 tons and with a top speed of 30 mph, makes short work of any obstacle in its path.

"To have that much weight on just two brake handles, it's awesome," said Ostling after the tank rolled over a car and rained glass around his head. The car "was like a tin can," he said.

DRIVE A TANK: http://www.driveatank.com or 507-931-7385. Located in Kasota, Minn., about 75 miles southwest of Minneapolis. Open several days a month; often fully booked ahead of time. Package that includes driving a tank and shooting a machine gun, $399. Additional $549 to smash a car.