The Internet Of Things, Robotic Manufacturing, And The End Of The World

While most minds go to jarring images from movies like I, Robot and Terminator (and rightfully so), the robotic apocalypse may not make its presence known in such a blockbuster-style war of intellect and brawn, but rather as a subtle emergence from an unexpected area: manufacturing. The term Internet of Things ... 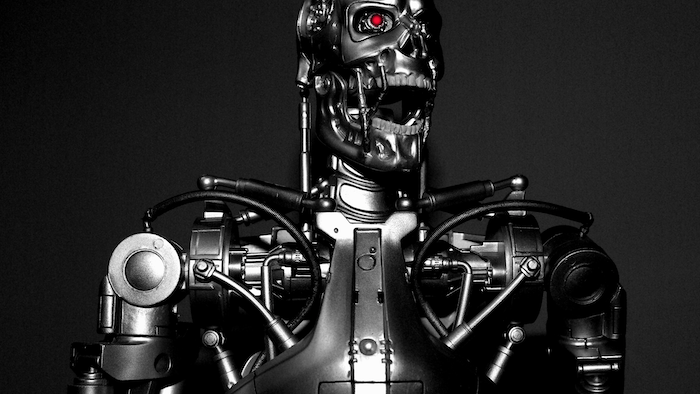 Hope we're not just the biological boot loader for digital superintelligence. Unfortunately, that is increasingly probable

While most minds go to jarring images from movies like I, Robot and Terminator (and rightfully so), the robotic apocalypse may not make its presence known in such a blockbuster-style war of intellect and brawn, but rather as a subtle emergence from an unexpected area: manufacturing.

The term Internet of Things (or IoT) has become much more than just a buzzword. According to Gartner, “IoT will include 26 billion units installed by 2020, and by that time, IoT product and service suppliers will generate incremental revenue exceeding $300 billion.”

This is great news for those of us that want to streamline mundane activities and add a convenience factor to, well, everything – I can open my garage door from my desk at work. This also provides a pivotal tool to the manufacturing community. Allowing sensors, machines, production equipment, and people to all communicate allows processes and work to run leaner and with fewer issues.

This could allow more manufacturing work to be done autonomously and without supervision, opening the door for even more robotics to circumvent average industry workers.

It goes without saying that this could be a labor-relations nightmare – in fact, robots replacing workers is an issue already. With the Internet of Things, these robotics systems have the opportunity to become smart, another buzzword.

A 2013 study from the University of Oxford, titled The Future of Employment: How Susceptible Are Jobs to Computerisation?, ranks 702 jobs that could be replaced by technology in the next 10 to 20 years. This is also assuming that AI doesn’t advance drastically in the next 20 years – meaning, the jobs being replaced are slightly more advanced than the mundane task-oriented jobs they are currently replacing.

If Moore’s Law stays true (which technology has exceeded in recent years), complex AI that does more than calibrate a factory robot or pitch-correct an off-trajectory drone will be in our not-so-distant future.

As a self-proclaimed futurist, I’m cautiously excited about the potential that this could bring, not only to the consumer market, but also, in the realm of manufacturing and production. Though, I would also postulate (perhaps only for drama’s sake) that we should take Elon Musk’s words to heart and worry less about robots taking our livelihoods, and worry more about our existence.

It may seem like Isaac Asimov-esc science fiction, but when systems are able to discover and remedy complex issues without any human intervention, we are not far from being ruled out as inefficient, or worse, unneeded.

But, let’s take a step back. Before we meet our end at the hands of our computer-coded enemies, they will first take our jobs.

As in much of the science fiction surrounding these topics, I’m hopeful that our emotional intelligence, innovative minds, and consciousness (you know, the things that make us human) will keep us ahead of the curve. Jobs and manufacturing will continuously change, but people seem to have the advantage of adaptability.

Do you think we’ll all eventually lose our jobs to robots, or will our humanity prove to be better than AI? Comment below or email chris.fox@advantagemedia.com, and stay tuned for more coverage in the area of labor-relations and automation.