This chart shows the payload to low-Earth orbit of selected rockets (measured in lbs). 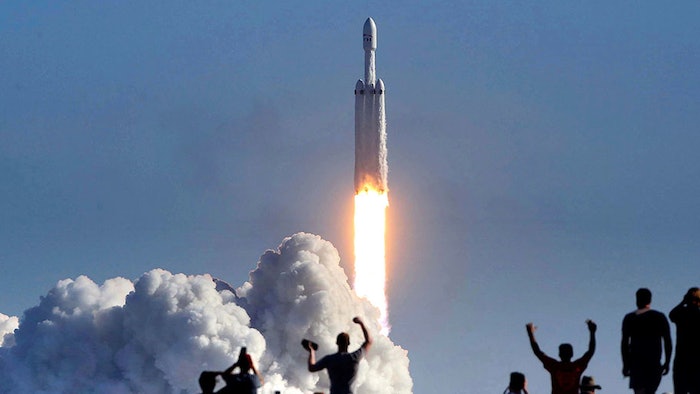 SpaceX's Falcon Heavy blasted off from the Kennedy Space Center on its maiden test flight yesterday. It has 5 million pounds of thrust at liftoff, making it the world's most powerful rocket by a factor of two and roughly equivalent to 18 Boeing 747 aircraft. Such an incredible level of thrust means the Falcon Heavy can carry an impressive payload of nearly 141,000 lbs into orbit.

That's nearly double the Delta IV Heavy (and at a third of the cost) according to SpaceX and the equivalent of lifting a Boeing 737 airliner fully loaded with crew, passengers, luggage and fuel. Only the Saturn V moon rocket which last flew in 1973, was able to deliver a heavier payload into orbit. The goal of Tuesday's flight is to prove that the Falcon Heavy can launch a payload into a hyperbolic deep space orbit which is known as the Hohmann transfer.

Historically, maiden rocket flights have a high failure rate so the Falcon Heavy will carry a dummy payload for its first launch. Elon Musk, the flamboyant founder of SpaceX, said he will consider it a win as long as the Falcon Heavy clears the launch pad without exploding. As a payload, the rocket will carry his beloved $100,000 red Tesla Roadster sports car, complete with a mannequin in a space suit at the wheel and Bowie's Space Oddity playing on a loop. Musk spoke to reporters on Monday, saying that the Tesla "will get about 400,000 million km away from Earth and be doing 11km/s. We estimate it will be in that orbit for several hundred million years, maybe in excess of a billion years".