In the same way that Amazon was an early adopter of the web and became a winner applying cloud technologies to challenge brick and mortar retailing, early adopters of RTLS and Bluetooth beacons will be able to apply the full power of cloud services to the manufacturing process. 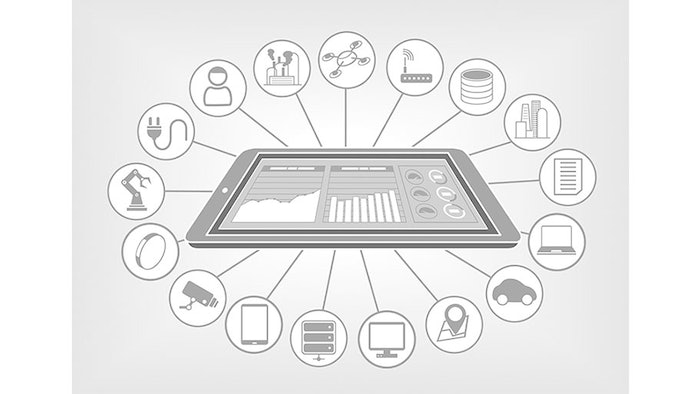 Back in the early 80s, T-squares were standard issue for all engineering draftsmen. The percentage of such offices using computer aided design (CAD) workstations was a rounding error. It’s not that such tools didn’t exist, but they were too expensive to be widely used. Then the PC arrived. AutoCAD was written and the process of creating and revising engineering drawings was revolutionized.

We may be about to see the same kind of disruption in the way the location of raw materials, staff, tools, and finished products are tracked in manufacturing environments. Very few manufacturers have been able to afford to track where all of those elements are on a real time basis, but that’s changing now.

RFID technology started to chip away at that challenge, but it still involves a lot of scanning to check items in and out of zones. High end manufacturers have started to use Real Time Location Solution (RTLS) technologies like Ultra-Wide Band (UWB) to optimize the production of premium products such as luxury vehicles, constantly tracking the location of tools, staff, materials and finished product. When sophisticated tools can sense the presence of a specific piece of work-in-progress, the configuration of those tools can be automated. This has enabled production lines to run a lot faster, with fewer errors and with a flexible mixture of car models sharing the same line. The cost of UWB RTLS is worth it when your product retails at $80,000.

In what has become a familiar dynamic of commoditization, Bluetooth beacon technology is starting to mature and challenge the UWB offerings. Bluetooth location and proximity services are achieving volume in markets adjacent to manufacturing such as retail. Now Bluetooth beacons threaten to disrupt the trail that has only just been blazed by UWB. The result is making the application of RTLS accessible to a much broader set of manufacturers who make products a lot less expensive than BMWs.

To convey a sense of the reduction in costs, let’s pick on just one element of an UWB RTLS system, the receiver, one of many elements required to track the location of an UWB beacon. This might cost in the order of $2,000 and would need to be wired into a proprietary network of many other UWB components. With Bluetooth the equivalent receiver might list at less than $100 and communicate back to a cloud system via Wi-Fi.

To be fair, a UWB RTLS system can track assets down to sub-meter accuracy and most Bluetooth based systems accuracy ranges from 4-meters down to 1-meter, depending upon the configuration and the vendor. While more accuracy is good, as Clayton Christianson describes in “The Innovator’s Dilemma”, disruption occurs when costs are drastically reduced and the quality of the disruptor is “good enough” to drive adoption in certain segments. When that happens, the quality of the cheaper technology improves and the more expensive incumbent gets squeezed into a niche market. This appears to be happening in RTLS. Bluetooth beacon vendors are starting to use more and more sophisticated techniques to get better fidelity from commodity hardware.

Using beacons to precisely locate staff is useful to:

Is this technology ready today? Yes, but …

Most Bluetooth beacon vendors’ product lines have not been designed for manufacturing. Most beacons in retail stores have been static, stuck under shelves for instance. They have been used to trigger proximity services on smartphones or tablets. While that can be valuable, in manufacturing the architecture is inverted. It’s the beacons (attached to people and things) that move around the shop floor. The mobile phones that would track them in a retail environment are replaced by static Bluetooth receivers, or gateways, that triangulate the location of beacons attached to pallets. Out of the hundreds of Bluetooth beacon manufacturers only a handful have reached the stage of producing these receivers or gateways.

So while some beacon vendors are seeing that there is money to be made in manufacturing and are producing the hardware, the next challenge is integrating these systems into the ERP systems that provide the human interface and system of record for the vast amounts of real time data that RTLS can produce.

To use the parlance of Geoffrey Moore and “Crossing the Chasm”, it’s the Innovators and the Early Adopters that are investing in proof of concepts and starting to experiment with pilot projects.

In the same way that Amazon was an early adopter of the web and became a winner applying cloud technologies to challenge brick and mortar retailing, early adopters of RTLS and Bluetooth beacons will be able to apply the full power of cloud services to the manufacturing process. Today no large retailer can afford to ignore the web. It will be interesting to see which companies strive to become the Amazon of manufacturing.

Stephen Statler is the CEO of SCI and author of the book, “Beacon Technologies: The Hitchhiker’s Guide to the Beacosystem".