Exploring The Role Of A Collaborative Manufacturing Robot

Last week, we published "Friendly Robots: The Future Of Advanced Manufacturing," about the creation of Baxter, the manufacutring robot. Here is a look at the purpose behind Baxter, his role in automating manufacturing, and his day-to-day work.  A manufacturing robot is hardly... 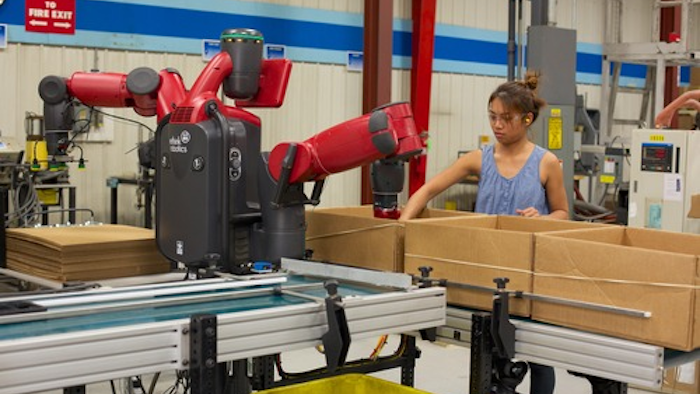 Last week, we published "Friendly Robots: The Future Of Advanced Manufacturing," about the creation of Baxter, the manufacutring robot. Here is a look at the purpose behind Baxter, his role in automating manufacturing, his interaction with humans, and his day-to-day work.

A manufacturing robot is hardly chummy chap. Set off from its flesh-and-blood coworkers inside a safety cage, its powerful metal biceps easily lift, weld and shape massive machine parts. People can watch it in awe from a distance, but they better keep away or risk injury.

That’s why, despite the appeal robots have for the human imagination, the machines are still automating only a thin slice of the manufacturing process. “If we want to move on, we have to start asking different questions about automation,” says Jim Lawton, chief marketing officer of Rethink Robotics. His Boston-based company developed a fix for the problem: Baxter, a collaborative robot, or Cobot, which works with people. “We need to free robots from their cages,” Lawton says.

That’s a message that appeals to Greg Heinz, who leads GE Healthcare’s Automation Center of Excellence in Waukesha, Wis. “This technology is a lower cost alternative to traditional fixed automation, which tends to be very expensive,” Heinz says. “It’s a new paradigm in manufacturing.”

Last summer, Heinz organized a “Cobot Challenge” looking for applications that addressed what he calls the four Ds: dirty, difficult, dangerous, and dull tasks that could be done by robots like Baxter. “Using Baxter to complement human labor with scalable automation relieves operators from stressful and monotonous duties and frees them up to do higher level tasks,” he says.

Out of more that 30 ideas from over 20 GE Healthcare sites from around the world, Heinz picked four locations – one each in Sweden and China, and two in the U.S.  A GE factory in Wuxi, near Shanghai in China, for example, found a highly repetitive task on a production line making ultrasound probes. “The workers stand in a cell where they have to wear masks to protect themselves from fumes,” Heinz says. “They pick up the part, dip it in a chemical primer solution, dry it with a wind gun, and then place the finished part onto a tray. It’s the perfect place for a Cobot.”

Rethink Robotic’s Lawton says Baxter is built for this kind of work. It’s different from common production robots because it combines easy movement-based learning with machine arms that mimic the “springiness” of the human version. These two qualities allow Baxter to recognize its position and adjust its grip as needed. “The robot interacts in a way that it doesn’t destroy anything,” Lawton says. When one of its swinging arms encounters an unexpected obstacle, say a person’s hand, the machine immediately stops moving.

Baxter has three cameras, one in its head and two in its two arms, which constantly check their positions and the location of nearby objects. “The cameras make it possible for Baxter to work as a human does, completing tasks in spite of their variability,” Lawton says. “Just as humans are undeterred by imprecision, Baxter can pick up parts even if they are not exactly at the same place every time.”

Last fall, the GE team in Wuxi unpacked their Baxter, equipped it with custom-made 3D-printed grippers that fit snugly around the ultrasound probe, and started testing. The machine will allow the factory to re-deploy the operator, improve the quality of the process and speed up production.

In Sweden, meanwhile, Baxter will improve the handling of metal pump heads coming down a conveyor belt from a computerized milling machine. The pumps are made to work inside chromatographs, instruments that measure the presence of biomolecules and must meet high quality standards.

Deploying Baxter will allow the facility to shrink and streamline the production line from five to two steps, boost required product control to 100 percent without stopping the line, and eliminate potential health hazards. Where workers once needed to walk 164,000 feet per year to complete all the steps in producing the pump heads - the equivalent of finishing a marathon plus five extra miles - they will now cover only 60,000 feet, just over a third of the distance, with Baxter helping them out.

The trials have gone so well that GE Ventures, GE’s venture capital arm, invested in Rethink Robotics this January. Heinz, who works with a Baxter located at GE Healthcare’s Advanced Manufacturing Center in Wisconsin, is already looking for new jobs for the robot. For example, he and his team 3D-printed special grippers for Baxter that allowed the team to study long-term twist and wear of wires inside GE’s new Revolution CT scanner (see below). “We went through a couple of renditions of the gripper, and it only took me about 5 minutes to program the robot,” Heinz says. “There was no other easy way to do that.”