Large seed companies are harnessing "big data" to provide farmers with guidance on how to get the most from their fields, but some farmers are concerned this information could be hacked or exploited by corporations or government agencies. 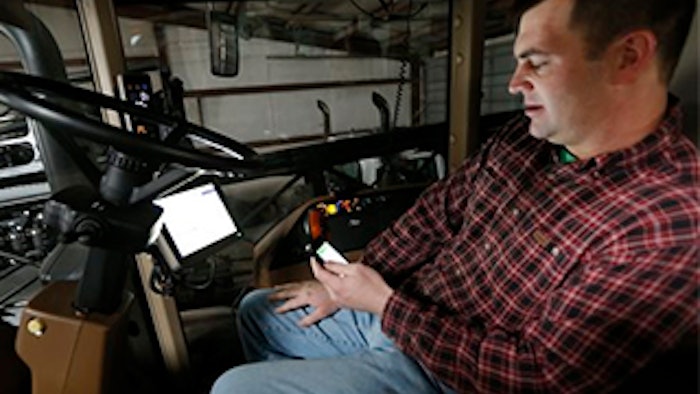 WICHITA, Kan. (AP) — Farmers from across the nation gathered in Washington this month for what has become an annual trek to seek action on the most important matters in American agriculture, such as immigration reform and water regulations.

But this time, a new, more shadowy issue also emerged: growing unease about how the largest seed companies are gathering vast amount of data from sensors on tractors, combines and other farm equipment.

The increasingly common sensors measure soil conditions, seeding rates, crop yields and many other variables, allowing companies to provide farmers with customized guidance on how to get the most out of their fields.

The involvement of the American Farm Bureau, the nation's largest and most prominent farming organization, illustrates how agriculture is cautiously entering a new era in which raw planting data holds both the promise of higher yields and the peril that the information could be hacked or exploited by corporations or government agencies.

Seed companies want to harness the data to help farmers grow more food with the same amount of land, and the industry's biggest brands have offered assurances that all information will be closely guarded.

But farmers are serving notice in Washington that the federal government might need to become involved in yet another debate over electronic security and privacy. Some members of Congress from rural states such as Kansas were already aware of the concerns, although the issue is new to many urban lawmakers.

Rep. Lynn Jenkins, a Kansas Republican who grew up on a dairy farm, said agriculture must achieve technological advances to keep up with population growth, which is expected to require 60 percent more food by 2050. But she has heard farmers' concerns about data collection.

"Information and data utilization is the way of the future," Jenkins said in an emailed statement. "And just as our federal government struggles with privacy concerns through records at the NSA and various health records, so too must we maintain appropriate privacy protection of individuals from corporate entitles."

The Farm Bureau isn't sure what it needs from Washington, or whether action is even warranted yet. But farmers want their elected officials to be aware of how the industry is changing.

This year's trip to Washington was primarily "an educational effort" to make sure members of Congress know about the data collecting and understand "the implications of the issue for our farmers and ranchers," Steve Baccus, an Ottawa County farmer and president of the Kansas Farm Bureau. "We may need to come back at some time in the future and talk to them about legislation."

Farmers worry that a hedge fund or large company with access to "real-time" yield data from hundreds of combines at harvest time might be able to use that information to speculate in commodities markets long before the government issues crop-production estimates.

Others are concerned that GPS-linked farm data could be obtained by the Environmental Protection Agency, antagonistic environmental groups or, in the Farm Bureau's words, "an overall-clad Edward Snowden," a reference to the former National Security Agency analyst who disclosed intelligence-gathering operations.

"It is not like we don't all trust them," Mark Nelson, director of commodities for the Kansas Farm Bureau, said of agribusiness companies. The new data-collection systems deliver "a lot of good things" to producers. "But as an organization we are looking at, 'What is the big picture?'"

The Farm Bureau Federation put together a "privacy expectation guide" to educate its members and recently drafted a policy asserting that data should remain the farmer's property. The bureau also opposes allowing any federal agency to serve as a clearinghouse for proprietary or aggregated data collected by private companies.

Agribusiness giant Monsanto and other corporations have tried to allay fears by reassuring farmers their data is secure and will not be used beyond providing services farmers request.

This season, growers in Illinois, Indiana, Iowa and Minnesota can even buy for the first time a Monsanto "prescription" that offers a precise seeding recipe tailored to their soil type, disease history and pests.

The St. Louis-based company, which has dominated the bioengineered seed business for more than a decade, expects to expand its prescription services to other states. It calls the advancements the "Green Data Revolution" — a play off the so-called Green Revolution of the 20th century in which mechanical, chemical and biological advancements drove unprecedented increases in food production.

Monsanto expects the use of ag data to offer comparable improvements in the next few years. It bought Precision Planting, a high-tech farm equipment maker, in 2012, followed last October by the purchase of the Climate Corporation, a data-analytics firm that provides weather-related farm services and crop insurance and is handling Monsanto's fledgling data-related services.

The Green Data Revolution will help farmers make more profit per acre, said Dave Friedberg, chief executive officer of The Climate Corporation. The average farmer, he says, won't have to be "tech savvy."

"Tech will just become integral to the work that they do ... in the same way that more than 100 years ago, we adopted machine-based farming equipment as the standard in the industry," Friedberg said.

Companies are also pushing an Open Ag Data Alliance, which would set uniform data standards and allow systems built by different manufacturers to talk to one another.

Farm equipment manufacturer John Deere has partnered with DuPont Pioneer to tout what it calls "Decision Services," a system in which farmers upload data onto servers that respond by sending seed and fertilizer prescriptions directly to Deere tractors in the field. Other companies offer services that let farmers connect a tablet computer to the seed monitor in the cab and download the information.

Farm groups are conflicted about what role, if any, government should have in regulating data-gathering practices.

"We don't believe ultimately there is a legislative fix for this," said Terry Holdren, chief executive officer and general counsel for the Kansas Farm Bureau. "It is a contractual model for folks who have technology and folks who want technology."

Nick Guetterman, who farms roughly 10,000 acres of corn and wheat with his father and three brothers in eastern Kansas, already uses GPS technology and has been considering sending all his data to a specialized service. But he still has reservations about what a seed company or an equipment manufacturer will do with it.

"I have not found it on my farm beneficial enough to pay them to analyze my data," Guetterman said. "I either analyze it myself or do nothing with it."