A metro car in Mexico City fell onto a busy intersection. 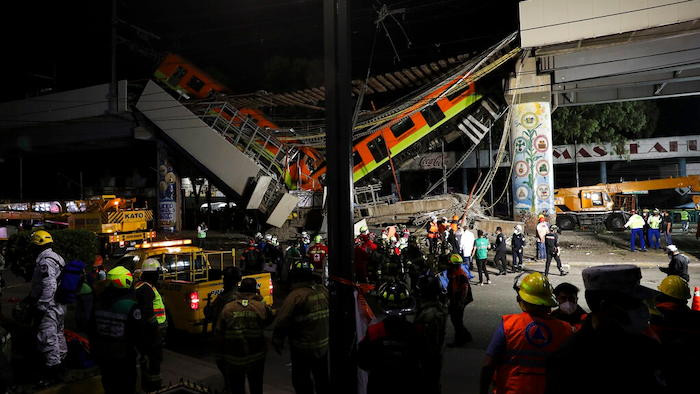 Mexico City's subway cars lay at an angle after a section of Line 12 of the subway collapsed in Mexico City, Tuesday, May 4, 2021. The section passing over a road in southern Mexico City collapsed Monday night, dropping a subway train, trapping cars, and causing at least 50 injuries and several dead, authorities said.
AP Photo/Marco Ugarte

MEXICO CITY (AP) — The death toll from the collapse of an overpass on the Mexico City metro rose to 24 Tuesday as crews untangled train carriages from the steel and concrete wreckage that fell onto a roadway.

Monday night's accident was one of the deadliest in the history of the subway, and questions quickly arose about the structural integrity of the mass transit system, among the world's busiest.

Another 27 people remained hospitalized of the more than 70 injured when the support beams collapsed about 10:30 p.m. as a train passed along the elevated section, Mayor Claudia Sheinbaum said.

On Tuesday, a crane carefully lowered a train car containing four bodies to the ground.

Of the 24 killed, 21 died at the scene, while the others died at hospitals. Only five have been identified so far. Children were among the fatalities, Sheinbaum said.

On Tuesday afternoon, Carlos Miramar waited under a tent on metal chairs with two other relatives to receive the body of his uncle. The 25-year-old student had been awake since beginning an “exasperating” odyssey the previous night that took them to seven hospitals and multiple prosecutor’s offices in search of his uncle.

Now they had found 38-year-old Carlos Pineda, a man he described as a soccer fan and buoyant personality. Pineda is survived by his wife, two children ages 7 and 13, and his mother.

“I’m tired and unable to sleep,” Miramar said. “He didn’t deserve this end. He was a good father, good husband and good son.”

Initial analysis pointed to a “presumed structural failure,” Sheinbaum said, promising a thorough and independent inquiry. She added that a Norwegian firm had been hired to investigate.

“I did not have any report nor alert of any problem that could have led us to this situation,” she said.

The overpass was about 5 meters (16 feet) above the road in the borough of Tlahuac, but the train ran above a concrete median strip, which apparently lessened the casualties among motorists.

Abelardo Sánchez, a 38-year-old cook, was just closing up his sandwich shop beside the metro line when he said the ground shook, a tremendous noise echoed, lights flickered and the air filled with dust and the smell of burning wires.

Stunned, Sánchez didn’t initially react. “Then a guy in a white shirt with blood on his arms, his hands and chest came out and another guy came to help him here on the sidewalk, and he was there trembling,” he said.

The Mexico City Metro — which is among the world's cheapest with tickets costing about 25 cents —has had at least three serious accidents since its inauguration half a century ago. In March 2020, a collision between two trains at the Tacubaya station left one passenger dead and injured 41. In 2015, a train that did not stop on time crashed into another at the Oceania station, injuring 12. In October 1975, at least 26 people were killed in another accident.

A magnitude 7.1 earthquake in 2017 exposed dangerous construction defects in the elevated line near where Monday’s accident occurred. Authorities at the time had done patchwork repairs on the columns and horizontal beams.

Julio Yañez, a 67-year-old lawyer whose apartment overlooks the collapsed metro line, was working at his computer when he heard a loud noise and felt his building shake. He saw a cloud of dust and falling debris followed by an eerie silence until emergency vehicles began arriving. Helicopters landed at a nearby Walmart to ferry the injured to hospitals.

The scene shook him because he had exited the metro at that same station earlier in the day.

“That part there was already declared bad ... in the earthquake, and the authorities didn’t pay attention,” Yañez said, noting similar problems were reported at another nearby station, but nothing was done. “They are time bombs.”

The collapse occurred on Line 12, the subway’s newest, that stretches to the city’s south side. Like many of the dozen subway lines, it runs underground through more central areas of the city of 9 million but is on elevated concrete structures on the outskirts.

A report issued by the subway system including photos in 2017 showed that the base of one vertical column supporting the tracks had cracked and shed layers of concrete because not enough steel rebar stirrups had been used when it was built around 2010. In 2017, authorities patched and widened the column by injecting resins, swathing it in carbon fiber, building a jacket of additional rebar around the base and pouring concrete around the collar.

Authorities also found that one of the horizontal beams had come loose from its support at the top of a vertical column and was sagging — the kind of failure that could have contributed to Monday’s collapse. Authorities at the time welded steel diagonal braces to the bottom of the beam, chipped out and repoured fractured concrete elements.

Mexican Foreign Relations Secretary Marcelo Ebrard called the collapse “the most terrible accident we have ever had in mass transportation.” Ebrard was Mexico City’s mayor from 2006 to 2012, when the affected line was built.

Allegations of poor design and construction on the subway line emerged soon after the Ebrard left office as mayor. The line had to be partly closed in 2014 so tracks could be repaired.

Ebrard, who leads Mexico’s efforts to obtain coronavirus vaccines, has been considered a potential presidential candidate in 2024.

“Of course, the causes should be investigated and those responsible should be identified,” he wrote. “I repeat that I am entirely at the disposition of authorities to contribute in whatever way is necessary.”

The line was closed Tuesday and hundreds of buses were called in. Thousands in surrounding neighborhoods lined up before dawn to catch the buses for work.