Printed Generators Could Power the IoT 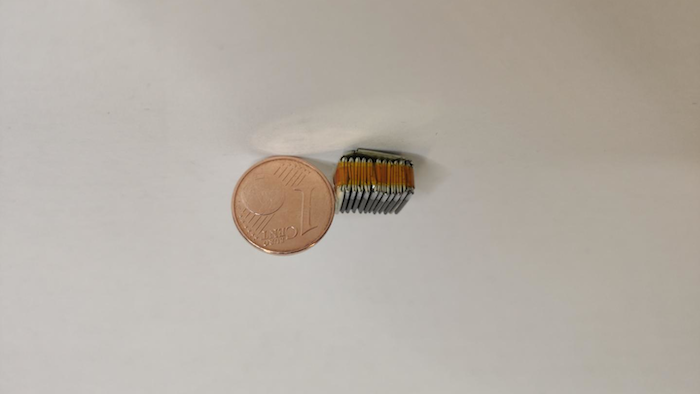 With the help of newly developed inks and special production techniques, such as origami, inexpensive thermoelectric generators can be produced for various applications.
Andres Rösch, KIT

Thermoelectric generators, TEGs for short, convert ambient heat into electrical power. They enable maintenance-free, environmentally friendly, and autonomous power supply of the continuously growing number of sensors and devices for the Internet of Things (IoT) and recovery of waste heat. Scientists of Karlsruhe Institute of Technology (KIT) have now developed three-dimensional component architectures based on novel, printable thermoelectric materials. This might be a milestone on the way towards use of inexpensive TEGs. The results are reported in npj Flexible Electronics (DOI: 10.1038/s41528-020-00098-1) and ACS Energy Letters (DOI: 10.1021/acsenergylett.0c02159).

"Thermoelectric generators directly convert thermal into electrical energy. This technology enables operation of autonomous sensors for the Internet of Things or in wearables, such as smart watches, fitness trackers, or digital glasses without batteries," says Professor Uli Lemmer, Head of the Light Technology Institute (LTI) of KIT. In addition, they might be used for the recovery of waste heat in industry and heating systems or in the geothermal energy sector.

"Conventional TEGs have to be assembled from individual components using relatively complex manufacturing methods," Lemmer says. "To avoid this, we studied novel printable materials and developed two innovative processes and inks based on organic as well as on inorganic nanoparticles." These processes and inks can be used to produce inexpensive, three-dimensional printed TEGs.

The first process uses screen printing to apply a 2D pattern onto an ultra-thin flexible substrate foil using thermoelectric printing inks. Then, a generator having about the size of a sugar cube is folded by means of an origami technique. This method has been developed jointly by KIT researchers, the Heidelberg Innovation Lab, and a spinoff of KIT. The second process consists in printing a 3D scaffold, to the surfaces of which the thermoelectric ink is applied.