Time is running out. 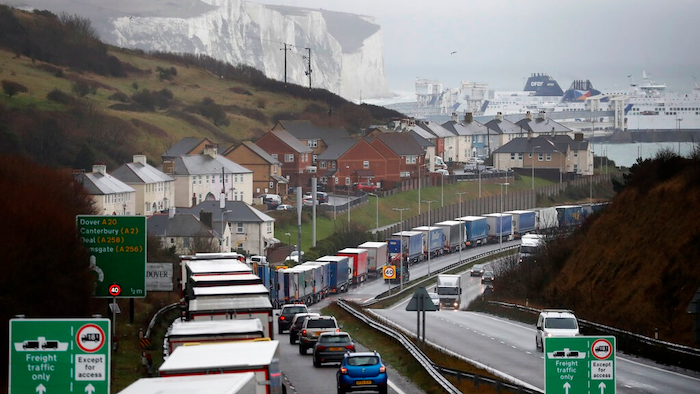 Lorries queue on the approaches to Dover, England, Friday, Dec. 11, 2020. The U.K. left the EU on Jan. 31, but remains within the bloc's tariff-free single market and customs union until the end of the year. British Prime Minister Boris Johnson says there is a "strong possibility" that talks on a post-Brexit trade agreement with the EU will end without agreement.
AP Photo/Frank Augstein

LONDON (AP) — British businesses and some European Union leaders on Friday urged Prime Minister Boris Johnson to strike a last-minute trade deal with the EU, as the two sides told their citizens to brace for New Year upheaval in the U.K.-EU trading relationship.

Johnson said it was “very, very likely” that negotiations on a new economic relationship to take effect Jan. 1 will fail to strike a deal. Johnson and European Commission President Ursula von der Leyen have set a Sunday deadline to decide whether to keep talking or prepare all-out for a no-deal break.

Johnson said "there is a way to go - we’re hopeful that progress can be made" between the two negotiating teams in Brussels.

“But I’ve got to tell that from where I stand now, ... it is looking very, very likely" that the U.K. will end up trading with the bloc on World Trade Organization terms — with all the tariffs and barriers that would bring.

Britain left the EU on Jan. 31 but has continued to follow the bloc’s rules during a transition period that lasts until the end of the year.

While both sides want a deal on the terms of a new relationship, they have fundamentally different views of what it entails. The EU fears Britain will slash social and environmental standards and pump state money into U.K. industries, becoming a low-regulation economic rival on the bloc’s doorstep, so is demanding strict “level playing field” guarantees in exchange for access to its markets.

The U.K. government claims the EU is trying to bind Britain to the bloc’s rules and regulations indefinitely, rather than treating it as an independent nation.

At the end of a two-day summit where she briefed the 27 EU leaders, von der Leyen said that the question of alignment with EU regulations need not be a deal-breaker, and would not undermine the U.K.'s cherished desire for sovereignty.

“They would remain free, sovereign, if you wish, to decide what they want to do," she said. “We would simply adapt the conditions for access to our market.”

In practice, that would mean that if, in the future, the EU finds that U.K. rules are too lax compared to its own, it could still allow for trade, but with added tariffs or other measures.

“This has nothing to do with freedom of sovereignty. He is sovereign, he is free and we are all free," said Dutch Prime Minister Mark Rutte.

Talks remained stuck also on the issues of fishing rights and the legal oversight of any deal.

“We have not yet found the solutions to bridge our differences,” von der Leyen said. “We will decide on Sunday whether we have the conditions for an agreement or not.”

Some EU nations warned their negotiators not to be too conciliatory towards London.

“There are questions of fundamental importance. They are not minimal," warned Italian Prime Minister Giuseppe Conte. “We’re talking about allowing a state that is no longer part of the European Union to enjoy advantages to the (EU) common market."

“To enjoy these advantages, you have to subject yourself to the rules of the common market," he said.

A no-deal split would bring overnight tariffs and other barriers that would hurt both sides, although most economists think the British economy would take a greater hit because the U.K. does almost half of its trade with the bloc.

Ahead of the year-end deadline there are already extra long tailbacks of trucks on both sides of the English Channel as U.K. companies try to lay in extra stock in case of disruption.

Britain’s Office for Budget Responsibility says a no-deal Brexit would slash 2% off U.K. gross domestic product in 2021, on top of the damage done by the coronavirus pandemic. Supermarkets say food prices will rise, with 85% of foods imported from the EU expected to face tariffs of more than 5%, according to the British Retail Consortium.

Rutte, whose country is a major gateway for British trade, pleaded that the U.K, should see economic reason, however belatedly.

To cushion some of the shock of a no-deal split, the EU has proposed contingency measures to make sure that air and road traffic can continue for six months after Jan. 1. It also proposes that fishermen should still have access to each other’s waters for up to a year.

The plans depend on the U.K. offering similar initiatives. The British government said it would “look closely” at the proposals.

“Let’s not walk away and cause a no-deal that would be devastating to not just Britain but to the European Union as well,” he told the BBC.