US Trade Deficit Falls to $63.9B in September 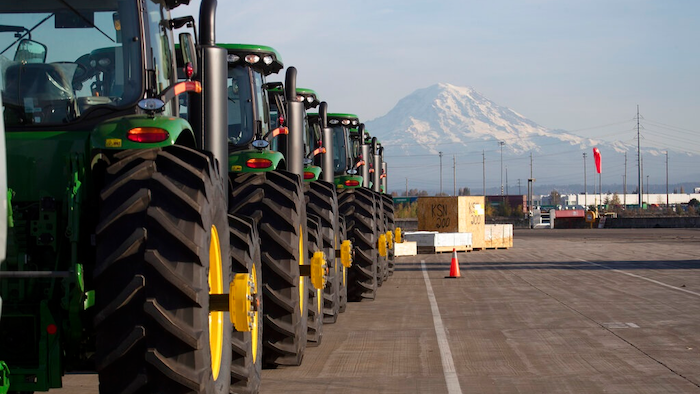 In this Nov. 4, 2019 file photo, John Deere tractors made by Deere & Company are shown as they are readied for export to Asia at the Port of Tacoma in Tacoma, Wash. The U.S. trade deficit fell in September 2020 after hitting a 14-year high in August as exports outpaced imports. The Commerce Department reported, Wednesday, Nov. 4, 2020, the gap between what the U.S. sells and what it buys abroad fell to 63.9 billion in September, a decline of 4.7% from a $67 billion deficit in August.
AP Photo/Ted S. Warren, File

Year to date, the goods and services deficit has jumped $38.5 billion, or 8.6%, to $485.6 billion. The total deficit for goods and services for the same period in 2019 was $447.1 billion. Total exports are down 17.4% this year from 2019, while imports have declined by 12.4% as the coronavirus pandemic has sabotaged global commerce this year and disrupted global supply chains everywhere.

The politically sensitive deficit in the trade of goods with China fell about 8% in September to $24.3 billion from $26.4 billion in August. Exports to China in September of $11.5 billion were the highest since March of 2018.

When Donald Trump campaigned for president in 2016 he pledged to sharply lower the country’s large trade deficits, especially with China, which for years has been the country with the largest trade surplus with the United States.

But despite Trump’s confrontational approach on trade with China and a renegotiation of the North American Free Trade Agreement with Canada and Mexico, America’s trade deficits have remained stubbornly high.