He is the first person convicted in the U.S. of both computer hacking and terrorism charges. 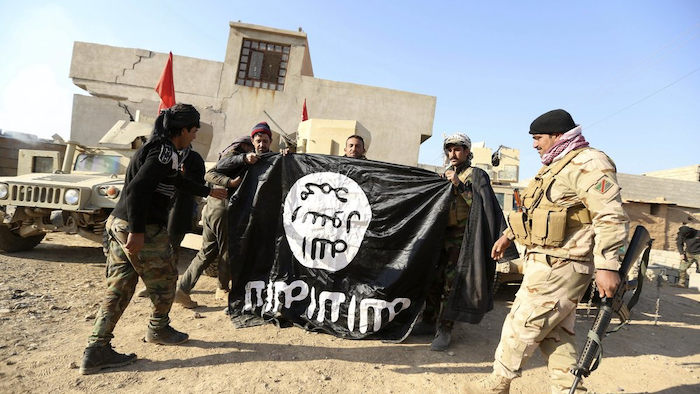 Iraqi Army soldiers celebrate as they hold a flag of the Islamic State group captured during a military operation to regain control of a village outside Mosul, Iraq, Nov. 29, 2016.
AP Photo/Hadi Mizban, File

ALEXANDRIA, Va. (AP) — A computer hacker who gave the Islamic State group personal data of more than 1,300 U.S. government and military personnel will remain in a federal prison after a judge rejected his request for compassionate release.

Ardit Ferizi, 24, is serving a 20-year sentence. The native of Kosovo is the first person convicted in the U.S. of both computer hacking and terrorism charges. He is currently held at a federal prison in Lewisburg, Pennsylvania, and is scheduled for release in 2032 if he gets credit for good behavior.

Ferizi asked a federal judge in Alexandria to release him from prison. In a handwritten motion from prison, he said his asthma and obesity place him at greater risk of contracting COVID-19. He also said special restrictions at the prison require him to check in with staff every two hours, increasing his contact with guards and his risk of contracting the virus.

Prosecutors opposed his release, and U.S. District Judge Leonie Brinkema rejected Ferizi's request at a hearing Tuesday, citing concerns that he might resume hacking if released, among other issues.