The former head of Mexico's state-owned oil company accused the former president and his treasury secretary of directing a kickback and embezzlement scheme. 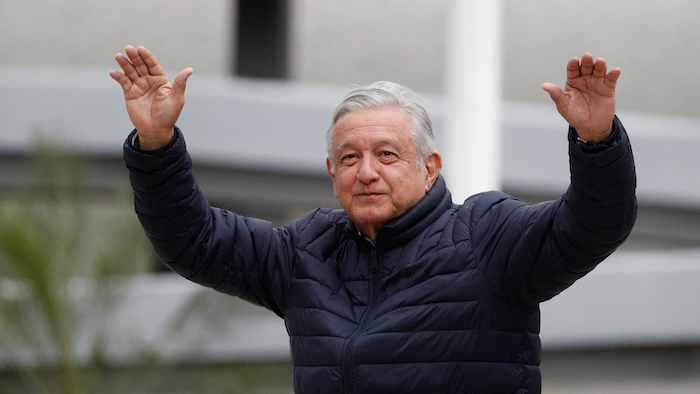 MEXICO CITY (AP) — In some of the most explosive accusations in recent Mexican political history, the former head of the state-owned oil company directly accused former President Enrique Peña Nieto and his treasury secretary of directing a scheme of kickbacks and embezzlement directly from the president’s office.

Emilio Lozoya, the former head of Petroleos Mexicanos who himself faces corruption charges, alleges Peña Nieto and Luis Videgaray used the state-owned Pemex as a conduit to “fulfill promises made during the (2012) campaign,” among other allegations he makes in a leaked 60-page document whose authenticity was confirmed by Mexican authorities Wednesday.

“Enrique Peña Nieto and Luis Videgaray Caso created a scheme of corruption in the federal government, in which the common denominator was that all the people who supported in some way the presidential campaign had to be recompensed or repaid,” usually in the form of cushy government contracts, Lozoya wrote.

"The president and the afore-mentioned treasury secretary used me to create a criminal conspiracy aimed at enriching themselves, not only by (taking) government funds, but also by extorting money from individuals and companies, fraud and deceit,” he wrote.

The Associated Press obtained a copy of Lozoya’s testimony, and its authenticity was confirmed first by two people with knowledge of the investigation and then by the federal Attorney General’s Office.

Lozoya was captured in southern Spain in February and extradited to Mexico in July to face charges he took over $4 million in bribes from Brazilian construction giant Odebrecht. But Mexican prosecutors announced they had reached an agreement with Lozoya in which he could avoid jail in return for testifying about corruption in Peña Nieto’s 2012-2018 administration.

Lozoya worked as international relations coordinator of Peña Nieto's campaign in 2012, and he told investigators the bribes paid by Odebrecht to Mexican officials were aimed at not only winning more lucrative public works contracts for the construction giant, but also at influencing Mexico’s planned sweeping energy reform, enacted once Peña Nieto was in office.

Lozoya’s job on the campaign was to obtain funding from foreign companies that could be used to pay foreign and Mexican consultants and to help position Peña Nieto’s image internationally.

In early 2012, Videgaray, who was Peña Nieto's campaign manager, allegedly told Lozoya to request $6 million from Odebrecht and tell the company it would be rewarded when Peña Nieto won. Part of that reward would presumably be the openings for private companies contained in the 2013 energy reform of the state-controlled sector.

“As part of the approval of the Pact for Mexico reforms, Enrique Pena Nieto and Luis Videgaray Caso told me in February 2013 that large quantities of money would have to be paid to the opposition so that they would vote in favor of certain structural reforms of interest for President Enrique Pena Nieto,” Lozoya wrote. The cash was to be distributed in transparent plastic bags, so the politicians could see the bills, and in fact a video leaked earlier this week showed one such transaction.

Lozoya named at least a dozen leading opposition figures as participating in bribes, including the 2018 presidential candidate of Peña Nieto's party, José Antonio Meade, who had enjoyed a friendly relationship López Obrador. Lozoya said about $300,000 was given to Meade and other politicians.

Meade wrote in his Twitter account Wednesday: “I will not contribute to media scandals ... I have devoted my public life to building a better country, always with absolute honor and legality.”

The opposition politicians mentioned by Lozoya include a half dozen former senators, among them the current governor of the border state of Tamaulipas, Francisco García Cabeza de Vaca. Lozoya also accused then-congressman Ricardo Anaya, who went on to become the 2018 presidential candidate for the conservative National Action Party, and other leading National Action figures.

Lozoya said former President Carlos Salinas de Gortari also participated, allegedly acting on behalf of National Action, known as the PAN, though the ex-president was a member of Peña Nieto's Institutional Revolutionary Party. Lozoya wrote that “the attitude of the PAN members in obtaining resources (money) was brutal," and that the party's members received about $4 million in bribes from one company.

There has been wide speculation the case will tar the opposition of current President Andrés Manuel López Obrador, who has termed the case a “historic” step in his fight against corruption.

National Action responded in a statement Wednesday that “Emilio Lozoya is a strategic ally of the president to denigrate the PAN, because it is an alternative to the failure” of López Obrador's policies.

“Regarding the leaked testimony, we repeat our stance: if there is compelling evidence, we will take compelling action,” the party stated, a reference to previous promises to expel any member caught in acts of corruption.

Lozoya said Peña Nieto and Videgaray personally questioned him about a deal to buy an outdated fertilizer plant at an excessive price from one private company, asking him in a meeting at the president’s office in 2013 “why is it taking so long.”

He said the two were particularly interested in the deal and that Videgaray rushed through a review of the deal and told him not to worry about the price being paid, which ended up being several times the plant’s real value. Lozoya said he was “surprised” by their level of interest in the deal, and said Peña Nieto and Videgaray negotiated the purchase with the plant’s owner.

“It was evident that Luis Videgaray Caso had a personal interest in getting the deal done, either because he would obtain some possible illicit benefit, or to pay off favors from the past.”

It was an apparent attempt by Lozoya to shift the blame from himself.

According to charges filed against Lozoya earlier this year, the Mexican firm, Altos Hornos de Mexico, sold the overpriced old fertilizer plant to Pemex after allegedly paying Lozoya around $3.4 million in bribes 2012. According to prosecutors, the money went though accounts controlled by Lozoya and his sister, and they used most of it to buy a house in an upscale neighborhood in the capital.

In the testimony, Lozoya claimed he was “intimidated” into signing off on the purchase of the fertilizer plant, known as Agronitrogenados, by the president and Videgaray.

“Luis Videgaray Caso took over leadership of the decisions regarding the purchase of Agronitrogenados, arguing, and I quote ‘This is the president’s business, you just do what you are told. I speak for him.’”

Lozoya even suggested the bribery and kickback scheme was meant to finance future campaigns by the Institutional Revolutionary Party, which governed Mexico for 70 years in the 20th century and returned to power in 2012 after a 12-year absence.

“Sometimes they (businessmen) had to give money back after the deals to benefit future PRI electoral campaigns, or for the personal benefit of Enrique Peña Nieto and Luis Videgaray Caso," according to the document.