The European Commission plans to invest up to $530 billion in renewable hydrogen by 2050. 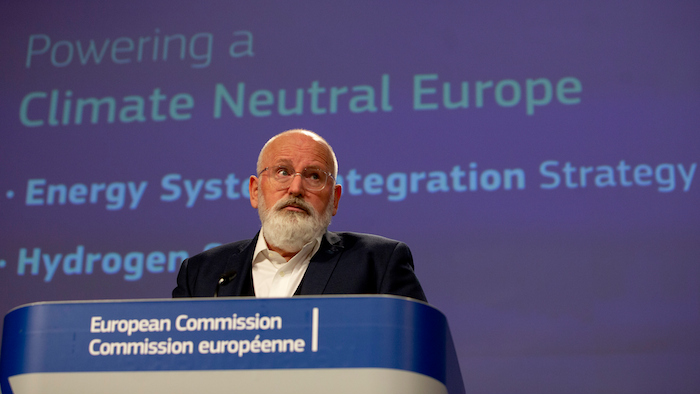 The executive branch of the European Union unveiled plans to boost the production of clean hydrogen as part of its goal to achieve climate neutrality by 2050 amid criticism from environmental activists and Green lawmakers pushing for a total exclusion of hydrogen produced from fossil fuels.

The European Commission said its project would help the EU's economy recover from the coronavirus pandemic, with investments in renewable hydrogen expected to reach between 180 to 470 billion euros ($203 to $530 billion) by the middle of the century.

Currently, hydrogen is produced almost exclusively from fossil fuels, including natural gas and coal. It accounts for less than 2% of Europe’s energy mix. The EU wants to increase that to 14% by 2050 while decarbonizing production using renewable energy sources like wind and solar energies.

“'We need a complete overhaul of the current energy system, which is quickly becoming a relic of the past,” said European Commission Vice President Frans Timmermans, who is in charge of environmental issues.

The commission said so-called “green hydrogen” — which does not emit carbon dioxide and can be used in industries such as steel and chemical manufacturing that currently rely on fossil fuels — could meet about a quarter of the world's energy demands by 2050.

The development of clean hydrogen has the potential to reduce carbon emissions in European industries by 90 million tons per year by 2030, according to the European Commission.

In the short-term, though, other types of low-carbon hydrogen made through processes associated with emissions will be needed in a transition phase, the commission said.

“During the transition, we will also need decarbonized natural gas, and nuclear, too, to make sure we reach the required volume of hydrogen to cut prices,” Timmermans said.

Environmental group Friends of the Earth Europe and Green lawmakers in the EU parliament opposed the use of low-carbon hydrogen and called on the commission to focus on hydrogen entirely produced from renewable energy.

Green European lawmakers also expressed concerns about the composition of the European Clean Hydrogen Alliance, which would be in charge of developing investment for hydrogen projects under the commission's plans. The Greens said they are particularly worried by the prominent role given to the “strong representation of gas and heavy industry companies" within the alliance.

“We need both the industry and the NGOs which have helped us creating the Green Deal," Timmermans said. “I want them at the table."