Customers canceled orders for 60 of the grounded 737 Max, and the company removed another 123 planes from its backlog. 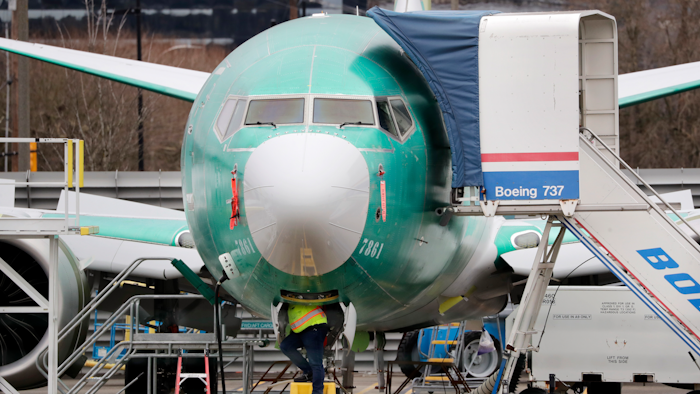 Boeing reported Tuesday that customers canceled orders for 60 of its grounded 737 Max jets in June, and the aircraft maker removed another 123 planes from its backlog because of doubts that the deals will be completed.

The slump in aircraft sales extends across the Atlantic. European rival Airbus reported no new orders in June.

Chicago-based Boeing, a leading U.S. exporter, was struggling before the pandemic hit because of the grounding of the Max -- once its best-selling plane -- after two deadly crashes. The coronavirus has compounded the company’s problems by causing a deep slump in air travel that has left airlines around the world with too many planes, not a need for more.

American Airlines is demanding that Boeing help it find financing for 17 Max jets that the airline expected to receive at least a year ago. Last month, Norwegian Air Shuttle announced that it plans to cancel its remaining order for 92 of the planes, saying that it had not settled with Boeing over compensation for the grounding of its current Max jets.

Boeing’s lone sale last month was a cargo jet ordered by FedEx. That compared with nine orders a year ago and 158 in June 2018.

So far this year, Boeing has recorded 59 new orders. That figure is dwarfed, however, by 382 cancellations — most of them abandoned orders for the Max — and the downgrading of 323 other orders because of uncertainty about the deals going through.

The company’s backlog of unfilled orders for passenger planes fell to 4,552, including 3,595 for 737s, a figure which includes both the Max and an older version of the plane called the NG.

Chief Financial Officer Greg Smith said Boeing’s defense and other businesses “will continue to provide some stability as we navigate through the pandemic and rebuild stronger on the other side.”

Airbus was shut out for new orders, but the European plane maker said it delivered 36 passenger jets in June, including 31 of its A320neo jets, which compete with the Max. Airbus said it ended June with a backlog of 7,584 planes.