The "Clean Cars Nevada" initiative would require as many as 8% of vehicles offered by dealers to be electric by 2025. 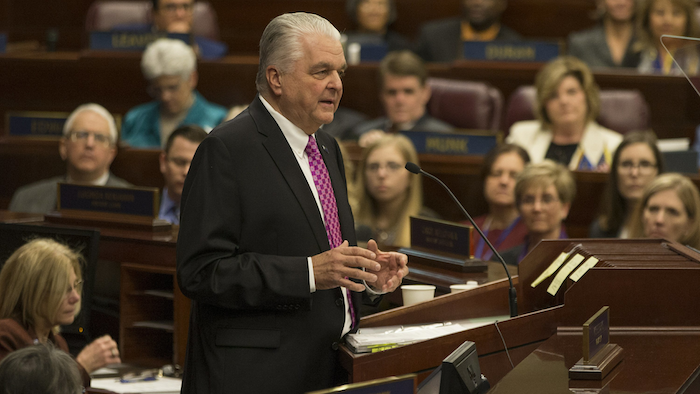 Sisolak's "Clean Cars Nevada" initiative would mandate that 6-8% of vehicles automobile dealers offer for sale be electric by 2025.

“This kind of decisive action is the first of many steps we will be taking as part of my commitment to addressing climate change under the State of Nevada Climate Initiative,” Sisolak said in a press release.

The Nevada Division of Environmental Protection will host public workshops to discuss the plan until 2021.

The standards are part of a broader push toward getting Nevada to “zero or near-zero” greenhouse gas emissions by 2050, a threshold Sisolak announced in a November executive order. The move bolsters environmentalists’ efforts to lower tailpipe emissions in Nevada and throughout the nation. It follows Attorney General Aaron Ford’s decision to sign onto two multi-state lawsuits that challenge the federal government’s ability to loosen emissions standards.

The first lawsuit alleges the automobile emissions rules the Environmental Protection Agency announced for 2021-26, which would roll back some of the federal Clean Car Standards introduced in 2010, violates the Clean Air Act and other federal legislation. The second lawsuit challenges a 2019 EPA decision to strip California of its ability to set stricter emission standards on auto-manufacturers, which it enjoys because it began regulating emission standards before the 1963 passage of the federal Clean Air Act.

Bradley Crowell, the director of Nevada's Department of Conservation and Natural Resources, said the state could not address greenhouse gas emissions without addressing transportation. The standards, he added, were part of a larger push to address climate change in the state.

Patricia Valderrama, the Natural Resources Defense Council’s Nevada Policy director, said it’s difficult for Nevadans to find electric cars because, in Las Vegas, only about a dozen of the 40 on the market are sold.

Fourteen states have adopted or are considering adopting similar requirements in response to the federal government’s attempts to relax clean car standards placed on auto-manufacturers.

As the technology advances and allows manufacturers to make electric cars more affordable, Valderrama said, the latest models are being shipped overseas or to “Clean Car” states that have signaled demand by adopting standards similar to the requirements Nevada is now considering.

“For people who are committed to spending less at the pump, this’ll make it easier to do that,” she said in an interview with The Associated Press.

In nearby states such as Colorado, similar moves have garnered resistance from car dealerships and the oil and gas industry and support from environmental and labor groups.