That's up 50 percent from the last time Amazon disclosed the number in 2018. 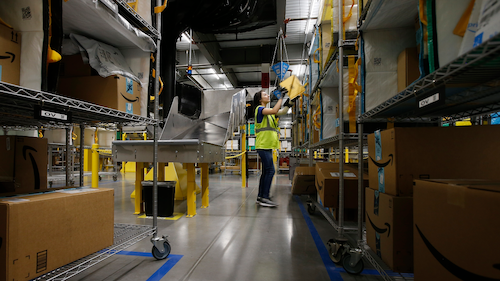 The online retailer said Thursday it has more than 150 million Prime members worldwide who pay $119 a year for faster shipping and other perks. That's up 50% from the last time Amazon disclosed the number in 2018. It also surpasses Netflix, which has 139 million members globally who pay to stream movies and TV shows.

“More people joined Prime this quarter than ever before,” said Jeff Bezos, Amazon's CEO and founder.

The Seattle-based company also reported financial results for the holiday season that were far better than analysts expected. Its shares soared 10% to $2,055 in after-hours trading Thursday.

The staggering number of Prime members is sure to spook other retailers. Analysts have said Prime subscribers typically spend more of their money at Amazon than other places.

There have already been signs that brick-and-mortar retailers had a rough holiday season. Target reported disappointing sales growth for November and December. And department stores Macy’s, Kohl’s and J.C. Penney all posted holiday sales declines. Walmart, the world's largest retailer, will release its results next month.

Amazon said part of the reason for the jump in Prime members is its promise to deliver more of its goods in one day instead of the two. That has been expensive to do, but Amazon said Thursday that its costs for the effort have started to ease and were slightly below the $1.5 billion it expected to spend during the last three months of the year.

Overall, the company said its fourth-quarter profit rose 8% to $3.3 billion.

Earnings per share came to $6.47, far beyond the $4.04 per share analysts were expecting, according to research firm FactSet.

Amazon has been expanding way beyond online shopping, helping to fuel is growth.

Revenue at it's cloud computing unit, which powers digital scrap-booking site Pinterest and many other companies, grew 34%, even though it has been facing increasing competition from other big tech companies.

Last fall, the U.S. government picked Microsoft over Amazon for a $10 billion contract to provide cloud services to the U.S. military. Amazon is protesting the decision, saying that President Donald Trump influenced the bidding process by bad mouthing the company.

Amazon's advertising business, which lets companies buy ads to show up in Amazon.com's search results, also grew. Amazon doesn’t say exactly how much its ad business makes, but lists it as part of its “other” revenue, which jumped 41% from the year before.