The European Union charged Google on Wednesday with abusing its overwhelming dominance in Internet searches and opened a probe into its Android mobile system. 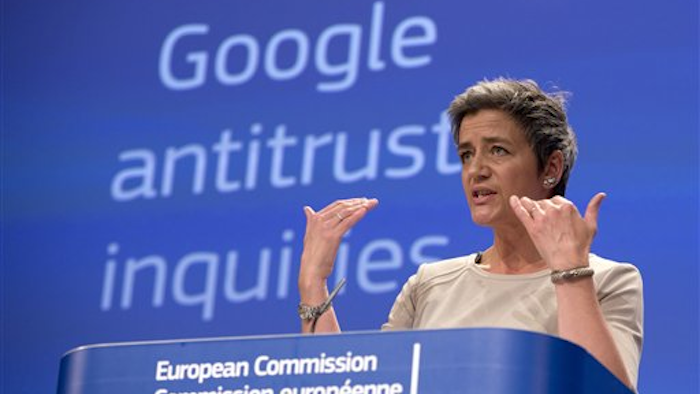 BRUSSELS (AP) — The European Union charged Google on Wednesday with abusing its overwhelming dominance in Internet searches and opened a probe into its Android mobile system, massively raising the stakes in the five-year antitrust battle.

The move could lead to billions in fines for Google if the case shows that the way it does business in the 28-country bloc is illegal, as well as years of legal wrangling.

The EU can impose fines of 10 percent on annual revenue, or some $6 billion, and force the company to overhaul its system for recommending websites in Europe.

The EU executive commission said it found that Google "gives systematic favorable treatment" to its Google Shopping at the expense of others in its general search results.

Margrethe Vestager, the EU's competition commissioner, said that was a problem because Google is so dominant in Europe. It has a market share of over 90 percent of Internet searches in the EU, compared with around 70 percent in the U.S.

"It is not based on the merits of Google Shopping that Google Shopping always comes up first," Vestager said. "Dominant companies have a responsibility not to abuse their powerful market position."

She said her chief goal was to make sure multinationals do not artificially deny European consumers as wide a choice as possible or stifle innovation. She noted that one in four companies complaining about Google were U.S. rivals.

Monique Goyens, director general of the European Consumer Organization, said that "Google's market share means it essentially decides which companies are placed in the shop window."

In the separate probe into Android, the EU alleges that Google is breaking the rules by obstructing rival operating systems, applications and services, hurting both consumers and innovators.

The EU has for years sought a settlement with Google, but says the company has not fully addressed its concerns. The company based in Mountain View, California, on Wednesday denied the EU allegations.

Google has 10 weeks to respond to all the latest allegations.

Amit Singhal, the senior vice president for Google Search, said that "while Google may be the most used search engine, people can now find and access information in numerous different ways -- and allegations of harm, for consumers and competitors, have proved to be wide of the mark."

When it comes to comparative internet shopping, Singhal wrote in a blog that "it's clear that (a) there's a ton of competition (including from Amazon and eBay, two of the biggest shopping sites in the world) and (b) Google's shopping results have not the harmed the competition."

Thomas Vinje, legal counsel for FairSearch Europe, a group that has been urging EU regulators to rein in Google, said that Wednesday's move was "a significant step towards ending Google's anti-competitive practices, which have harmed innovation and consumer choice."