China's manufacturing fell to the lowest level in nearly a year as new orders shrank, according to a report Tuesday that underscored the weakening outlook for the world's second biggest economy. 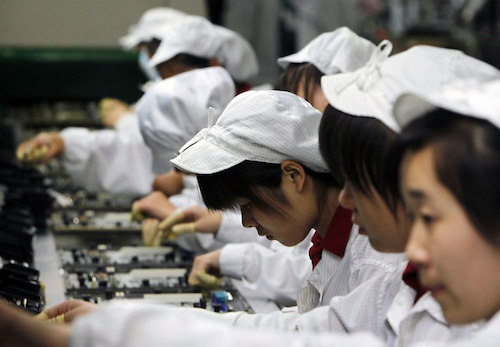 HONG KONG (AP) — China's manufacturing fell to the lowest level in nearly a year as new orders shrank, according to a report Tuesday that underscored the weakening outlook for the world's second biggest economy.

HSBC's preliminary manufacturing index based on a survey of factory purchasing managers dropped to an 11-month low of 49.2 in March from February's 50.7. The index is based on a 100-point scale on which numbers below 50 indicate contraction in activity.

The numbers signaled a "slight deterioration" in Chinese manufacturing, said the report, which found decreases in sub-indexes for new orders, new export orders and employment. It was the first report since the Lunar New Year holiday, which tends to distort economic data because it falls at a different time in January or February each year.

"A renewed fall in total new business contributed to weaker expansion of output while manufacturing companies continued to trim their workforce numbers," said Annabel Fiddes, an economist at Markit, which conducted the survey.

The weakness in China's massive manufacturing industry, which employs millions, is a challenge for Beijing as it tries to prevent the economy from slowing too sharply.

China's economy expanded 7.4 percent last year, its slowest pace in nearly a quarter century, and economists predict growth will slow further this year and the next.

"Today's weaker-than-expected PMI reading is the latest in a string of disappointing data out of China and strengthens our view that the economy likely slowed sharply" in the first quarter, said Julian Evans-Pritchard, an economist at Capital Economics.

Policymakers have acted in recent months to counter slowing growth by cutting interest rates and lowering minimum reserve levels for banks and Evans-Pritchard said he expected more of the same in coming months.

The preliminary results of HSBC's survey covers 85-90 percent of responses from more than 420 manufacturers. The final version is due out April 1.