Auto Industry Slows For Bad Weather, But Stays On Course

February threw snowstorms and other roadblocks at the auto industry, but U.S. sales of new cars and trucks are still poised to hit their highest level in more than a decade this year. 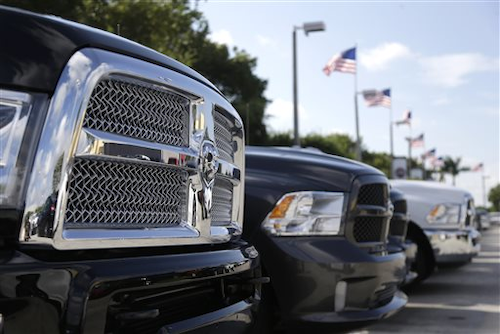 DETROIT (AP) — February threw snowstorms and other roadblocks at the auto industry, but U.S. sales of new cars and trucks are still poised to hit their highest level in more than a decade this year.

Freezing temperatures, disruptions at West Coast ports and rising gas prices took a bite out of U.S. auto sales last month. Still, most automakers reported gains, and analysts say lost sales should be made up as the weather warms in March.

"We've already put February in the rear-view mirror," said Ken Cataldo, the general manager of Colonial Volkswagen of Medford, Massachusetts, who spent much of last month cleaning snow off the cars on his lot.

Industry sales were up 5.3 percent to 1.25 million, according to Autodata Corp. That fell short of expected gains of 8 or 9 percent, but the mood in the industry remained positive.

Toyota's U.S. sales chief Bill Fay noted that February was the 12th straight month of year-over-year sales gains for the industry. When combined with January, the market is off to its strongest start since 2007, Fay said.

Falling unemployment, low interest rates and new versions of big sellers like the Jeep Cherokee — which saw sales jump 19 percent in February — are driving the increases.

The forecasting firm LMC Automotive pushed up its 2015 forecast by 40,000 vehicles last month based on strong demand. The firm is expecting U.S. sales to top 17 million this year for the first time since 2001, up from 16.5 million last year.

Still, LMC said it became apparent as the month went along that bad weather in the mid-South and on the East Coast was hurting sales.

Colonial Volkswagen had almost no customers for a two-week period at the start of the month.

Conditions improved by the end of the month. Colonial ended up selling 75 cars, still short of its goal of 115 and the normal monthly sales of 130, Cataldo said. He's hoping to make up for the lost sales this month.

There were also obstacles to overcome on the other side of the country. Toyota and Porsche said sales were hurt by a labor dispute that halted shipments at some West Coast ports. The impasse was settled on Feb. 21, but could still impact March results since it slowed shipments of auto parts.

In California, gas prices soared to more than $3.30 per gallon after an explosion at a refinery; nationally, they rose around 30 cents per gallon. But the national average of $2.44 per gallon is still $1 less than a year ago, according to AAA.

Consumers and businesses still shopped for trucks and SUVs despite the higher gas prices. GM said sales of the Chevrolet Silverado pickup jumped 24 percent last month to 45,395. And small SUVs continue to be one of the hottest segments in the market. Toyota sold nearly 22,000 RAV4 SUVs, up 33 percent from a year ago and a February record for the vehicle.

Toyota sales rose 13.3 percent, benefiting from updates to sedans such as the Corolla, Camry and Avalon, said Akshay Anand, an analyst with Kelley Blue Book. The only weak spot was the Prius hybrid, a victim of lower gas prices.

Subaru's sales jumped 18 percent to 41,358 vehicles. Its best-selling vehicle, the Outback SUV, was up 30 percent.

GM's sales rose 4.2 percent to 231,378. It got a boost from big SUVs like the Cadillac Escalade, which saw sales nearly double over last February.

Ford's sales fell nearly 2 percent to 180,383. Every Ford and Lincoln brand car except for the Mustang was down, and key SUVs like the Escape and Edge also saw declines. Sales of the new F-150 were slowed by below-normal inventory.

Chrysler's sales were up 5.6 percent to 163,586 vehicles, its best February in eight years. Sales of the Jeep brand rose 21 percent as Americans continued their shift from cars to SUVs.

Honda's sales were up 5.0 percent to 105,466. Sales of its Fit subcompact jumped 81 percent after a recent redesign, but sales of other cars such as the Accord and Civic fell.