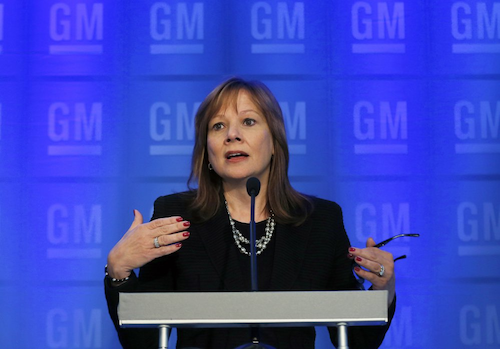 DETROIT (AP) — General Motors CEO Mary Barra confirmed Tuesday that she has been interviewed by the Justice Department in its criminal probe of how the company handled a deadly ignition switch problem in older small cars.

Citi Analyst Itay Michaeli, in a recent note to investors, cautioned that previous auto industry mergers have been "fraught with cultural and product complexities that often yielded mixed results at best."

Michaeli agreed with Barra that GM can save money on its own. "We certainly wouldn't frown upon consolidation attempts, but in GM's particular case we see plenty of opportunity for internal consolidation to achieve greater scale and purchasing synergies, at least over the next 1-2 years," he wrote.

The company also announced that 2016 model Cadillacs will have Apple CarPlay and Google's Android Auto to integrate smart phones into the cars' dashboard systems. The company announced last month that the systems would be in many in many future Chevrolet models.