A group of U.S. senators says automotive airbag maker Takata Corp. may have placed profit over safety by halting safety audits of factories. 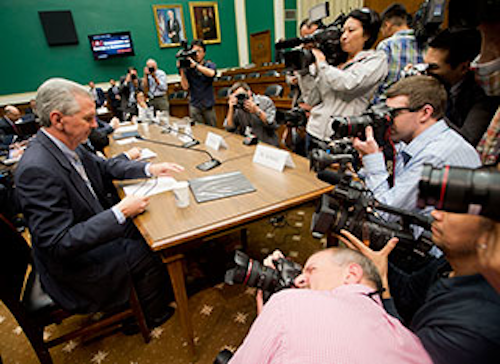 Democratic members of the Senate Commerce Committee made the allegation in a report on the Takata airbag crisis, citing internal company emails showing that the global audits were stopped for financial reasons from 2009 to 2011.

Inflators in Takata airbags can explode with too much force, sending metal shrapnel into drivers and passengers. The problem has caused at least eight deaths and 105 injuries.

The report, released a day ahead of a committee hearing on Takata airbag problems, says that once a senior vice president called for the audits to be resumed, a safety director faulted a factory in Mexico for failing to properly close bags of ammonium nitrate, the airbag propellant, and for storing contaminated propellant near good materials.

Takata has said that the propellant can deteriorate when exposed to airborne moisture, causing it to burn faster than designed. That can blow apart a metal canister designed to contain an explosion that's supposed to inflate the airbag.

The Democratic report also found that an unknown number of Takata airbag inflators made to replace recalled parts might also be defective. And it accused the government's National Highway Traffic Safety Administration of failing to promptly investigate early reports of defective airbags.

In May, Takata bowed to U.S. government pressure and agreed to double the number of airbag inflators it's recalling to 33.8 million, making it the largest automotive recall in U.S. history. The problem, which has persisted for more than a decade, has brought congressional hearings and investigations from NHTSA and the Justice Department.