Discussing how U.S. and Chinese experts and businesses can collaborate on nuclear energy, smarter electricity use and other clean technologies is a top agenda item as Chinese President Xi Jinping arrives in Seattle Tuesday. 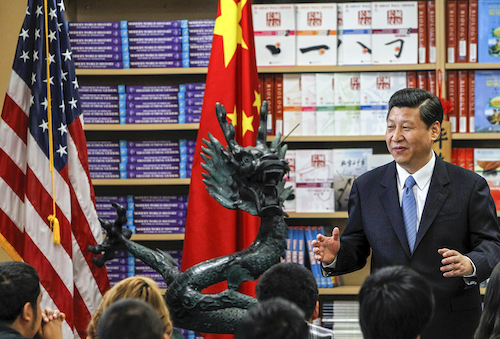 SEATTLE (AP) — Discussing how U.S. and Chinese experts and businesses can collaborate on nuclear energy, smarter electricity use and other clean technologies is a top agenda item as Chinese President Xi Jinping arrives in Seattle Tuesday, almost a year after he and President Barack Obama announced their nations would cooperate to fight climate change.

The three-day visit begins with talks between a handful of U.S. governors and six of their Chinese counterparts over issues that include improving energy efficiency in buildings, modernizing electrical grids and commercializing renewable energy, and the governors are expected to meet privately with Xi later in the day.

The University of Washington and Tsinghua University in Beijing are scheduled to sign an agreement saying they'll collaborate on research related to clean tech, and an energy company founded by Bill Gates, TerraPower Inc., will be entering an agreement with China National Nuclear Corp. to plan to work together on next-generation nuclear power plant technology.

U.S.-China cooperation on climate-change has been a warmer and fuzzier point of relations between the superpowers than others recently.

In November 2009, Obama and then-President Hu Jintao formalized a renewable energy partnership, including the establishment of clean-energy research centers focused on electric vehicles, cleaner coal and water energy programs. Last November, Obama and Xi announced that the countries would work together on climate change, with China announcing it would try to cap its greenhouse gas emissions by 2030, or sooner if possible.

By contrast, hacking attacks on the U.S., said to be directed by Beijing, and China's moves to assert its territorial claims in the South China Sea have been sore spots.

Xi is traveling to Seattle on his way to Washington, D.C., for a White House state dinner on Friday. The trip comes at a time when China's economic growth has slowed considerably, and when the Communist nation is overhauling its economy to put more emphasis on consumer spending and less on an exports and often-wasteful investment in factories, real estate and infrastructure such as railways and airports.

That shift will demand vast amounts of energy as China's middle class expands, noted Tom Ranken, president of the CleanTech Alliance, a Seattle-based trade association of companies and organizations with a stake in clean energy technology, including Boeing, the University of Washington and hundreds of others. The need for China to curb its pollution is obvious to anyone who's spent time in Beijing or Shanghai, he said.

"For an American going to those cities it's quite stunning," he said. "They're ultramodern, and yet everybody has a story, including me, about going out Monday morning running and almost getting sick after about a half mile from the air pollution.

"As we are able to develop new technologies — for example, battery storage technologies — they could have drama implications for what's going on in China," Ranken said. "To the extent we can collaborate in developing technologies like energy storage, we can take those wind and solar tech that have made so much progress in the last decade and make them baseload technologies, as opposed to technologies that work when the wind is blowing or the sun is shining."

Because Washington state relies largely on hydropower and because natural gas is currently cheap, some Washington-based clean-tech firms may sooner find markets and investment in China than they might domestically, he said.

China invested a record $83 billion in renewable energy last year, a record, according to the Frankfurt School's Center for Climate and Sustainable Energy Finance in Germany.

"They see this as a huge business opportunity for the future, especially in solar and wind," said Mikkal Herberg, research director for the energy security program at the National Bureau of Asian Research. "They want to be a global leader in renewable energy technology. They want to be a leader in nuclear energy."