Fiat Chrysler U.S. overcame freezing temperatures and a barrage of Northeast snowstorms to post a 5.6 percent sales gain last month as customers nationwide brushed off the weather and continued to buy cars. 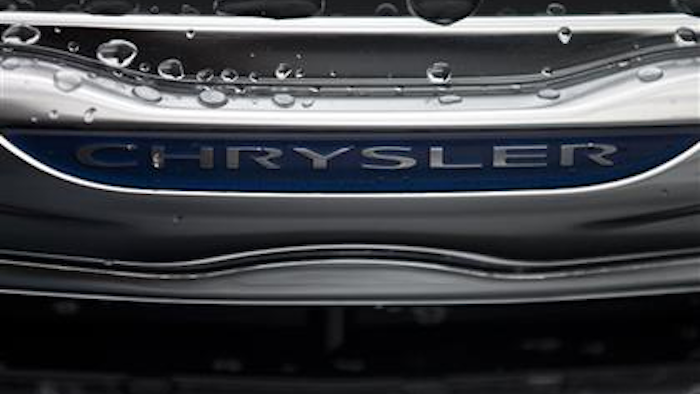 The company sold 163,586 cars and trucks to post its best February in eight years, led by the Jeep brand with a 21 percent increase. It was Jeep's best February ever. Chrysler's Ram pickup sales also grew, by 7 percent to more than 31,000, while Jeep Cherokee small SUV sales rose 19 percent to just over 14,000.

All automakers report U.S. sales on Tuesday, and analysts are predicting an 8 percent increase over a year ago to nearly 1.3 million vehicles. They say a strong economy helped offset rising gas prices and bad weather in February. LMC Automotive, a forecasting firm, predicted the best February for the industry in 13 years.

Falling unemployment, low interest rates and new versions of big sellers like the Cherokee and Ford F-150 drove buyers to dealerships. Based on the strong demand, LMC inched up its 2015 forecast by 40,000 vehicles. The firm is expecting U.S. sales to top 17 million this year for the first time since 2001.

Chrysler's sales for February still fell short of analysts' expectations. The TrueCar.com auto pricing site, for instance, expected a gain of more than 8 percent. But the sales still were relatively strong in the wake of record cold over much of the nation's midsection and snow blanketing the Northeast.

Colonial Volkswagen of Medford, Massachusetts, had almost no customers for a two-week period at the start of the month. Ken Cataldo, the dealership's general manager, said he and his staff spent much of the time clearing snow from cars and moving them around the lot just north of Boston in order to plow snow away.

But as temperatures warmed at the end of the month, some customers came out of hibernation. Colonial ended up selling 75 cars, still short of its goal of 115 and the normal monthly sales of 130, Cataldo said. He's hoping to make up for the lost sales this month.

On the other side of the country, in California, gas prices soared to more than $3.30 per gallon after an explosion at a refinery; nationally, they rose around 30 cents per gallon. But the national average of $2.43 per gallon is still $1 less than a year ago, according to AAA.

Analysts said demand for trucks and SUVs continued to be strong despite the higher gas prices, partly because Ford's new F-150 is just hitting the market.

But Kelley Blue Book said it expects consumers to start shifting back to cars and SUVs from Toyota and Honda, which are seen as more fuel efficient.