Purchases of long-lasting manufactured goods in March jumped by the largest amount in eight months, but a closer look reveals that businesses kept pruning their investment plans. 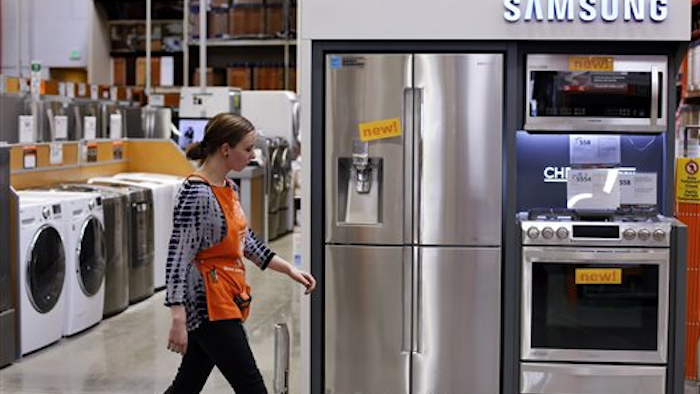 WASHINGTON (AP) — Purchases of long-lasting manufactured goods in March jumped by the largest amount in eight months, but a closer look at the details reveals that businesses kept pruning their investment plans in the face of a softening U.S. economy.

Orders to factories for durable goods rebounded 4 percent in March after a 1.4 percent decline in February, the Commerce Department reported Friday. The result was led by a big jump in demand for commercial aircraft. Outside of the transportation category, however, orders fell for a sixth straight month.

More worrying was a 0.5 percent drop in demand in a key category that serves as a proxy for future business investment. The retreat followed a 2.2 percent drop in February and marked the seven straight monthly decline.

"The report was yet another false positive that looks good in the headline but is eroding away underneath," said Michael Montgomery, U.S. economist with IHS Global Insight.

U.S. manufacturers have been hurt by a labor dispute at West Coast ports that disrupted supply chains in the early part of the year. They were also hit with winter weather in many parts of the country that was harsh enough to disrupt production.

Moreover, manufacturers have been grappling with a sharp rise in the value of the dollar, which cuts into exports by making U.S. goods more expensive overseas. A stronger dollar also makes imports cheaper and more competitive in the United States.

Demand for commercial aircraft, a volatile category, jumped 30.6 percent in March after a 2.2 percent decline in February. Orders for motor vehicles rose 5.4 percent, and the overall transportation category expanded 13.5 percent. Excluding transportation, however, the weakness was widespread with orders down 0.2 percent.

Demand for primary metals such as steel edged down 0.2 percent, while orders for machinery dropped 1.5 percent. Demand for communications equipment fell 5.3 percent. Orders for computers and related equipment rose 11 percent in one of the few areas of strength in March.

Economists believe that overall economic growth slowed to between 1 percent and 1.5 percent in the January-March quarter. They are forecasting a rebound to growth of around 3 percent for the rest of this year.