For Americans, there are cheaper vacations in Europe and lower-priced imports. A Chinese factory is selling fewer goods in Europe. A U.S. toymaker's exports are being squeezed. A German winery says overseas demand is up. 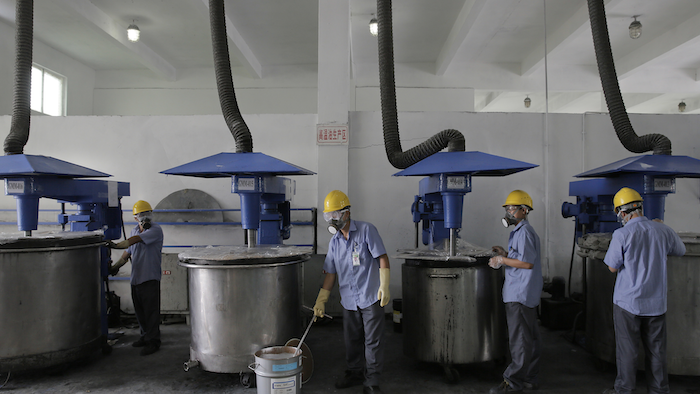 HONG KONG (AP) — For Americans, there are cheaper vacations in Europe and lower-priced imports. A Chinese factory is selling fewer goods in Europe. A U.S. toymaker's exports are being squeezed. A German winery says overseas demand is up.

In the months since the U.S. dollar began rising in value against other currencies, the consequences have reverberated, for better or worse, around the world.

Who wins and who loses isn't always obvious.

In Europe, many exporters have benefited because a stronger dollar tends to make their products cheaper in the United States. Yet in practice, some companies can't expect a boost in sales whenever currency values shift.

German winemaker Schloss Vollrads, housed in a castle with a 14th century tower overlooking the Rhine River town of Oestrich-Winkel, regards the stronger dollar as a welcome but temporary blessing.

"A weaker euro always means that we have bigger demand from our export destinations," says Managing Director Rowald Hepp. "But we also have to take into consideration that we have a very, very high volatility of currency exchange rates right now, and it can change very quickly."

Since 2015 began, the dollar's strength has moderated. Its value against a basket of currencies has risen about 3 percent so far in 2015 after surging nearly 12 percent in 2014.

Hepp's winery takes the long view, not surprising for a business that traces its roots back 800 years to its first recorded sale to a monastery in 1211. Schloss Vollrads says it remains focused on long-term relationships with its import partners, who move its products to several dozen countries.

The winery's prices are set to cover costs in euros. Once its price list is set in February — covering the vintage harvested the previous October — it won't change until the next harvest.

Yet wine drinkers may not see much price difference. Importers are billed in euros. It's up to them to set dollar prices. And if there's any currency windfall, wineries like Hepp's may pocket it to make up for thinner profits or losses when the euro was strong.

"We only have one crop per year, one yield per year, and our customers are looking for reliable prices over the long term," Hepp says.

"I cannot influence it," he says of the exchange rate, "so I don't spend too many thoughts on things I can't change."

In China, where the yuan has risen in tandem with the dollar because of Beijing's tight control, manufacturers are losing some overseas sales.

"We've lost some business in Europe," says Ravin Gandhi, Chicago-based CEO of GMM Nonstick Coatings, the world's third-biggest maker of nonstick coatings for cookware and electrical appliances. It has a factory in the southern Chinese city of Zhuhai and another in India.

"The fact that the euro has become weaker has absolutely hurt us in the sense that our European clients, they come to us and say, 'We may not be able to afford your product'," Gandhi says.

As a result, he's considered establishing a factory in Europe.

Smaller companies tend to be more vulnerable to currency fluctuations, notes David Stockton, a senior fellow at the Peterson Institute for International Economics.

"Big multinational corporations with production locations all over the world simply have more levers to pull in terms of adjusting their own production patterns across these countries," Stockton says.

For anyone trying to determine whether the dollar's rebound will be short-lived, Stockton says, the outlook has been complicated by signs of weakness in the U.S. economy.

In Russia, consumers have endured a volatile ride with the ruble. It was the second-worst-performing currency against the dollar last year. This year, by contrast, it's one of the best performing currencies.

That yo-yo-ing has made life unpredictable for Russian businesses with dealings abroad. Yet it's helped create a successful Winter Olympic legacy in the ski resort of Sochi, says Evgeny Titkov of Moscow's CheapTrip travel agency.

Russian skiers who couldn't afford European resorts flocked to some in the North Caucasus that had been rebuilt for last year's games.

"Earlier, the popular places for skiing for us were Austria, Italy, Andorra," Titkov says. "But now, I think with the help of our government, they reoriented toward Sochi, Krasnaya Polyana, Dombai."

Now that the ruble has risen, "the situation is getting better," and Russians are looking abroad for summer destinations, Titkov says. Still, uncertainty over further currency fluctuations worries Russian consumers, he says.

For many U.S. exporters, the dollar's strength has made their products pricier abroad. One of them is Green Toys, a company in San Leandro, California, that makes toy cars and airplanes out of recycled plastic milk jugs. Still, Green Toys, which exports to 90 countries, says it regards the fluctuations as short-term phenomena.

"As an exporter, it's been challenging over the last year," says co-founder Robert von Goeber. "In five years, it might be to our advantage. If you look at the long term, it almost always evens out."

David McHugh in Frankfurt, James Ellingworth and Iulia Subbotovska in Moscow, Haven Daley in San Francisco, Teresa Crawford in Chicago and Christopher S. Rugaber and Tracy Brown in Washington contributed to this report.