Xi Says 'Without Reform' No Progress For Business In China 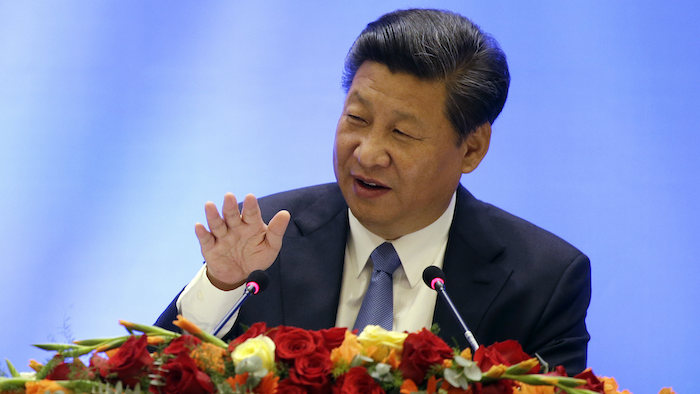 Xi's conference with the business leaders in Seattle was part of a busy day. He also toured the Boeing production facility in Everett, the sprawling suburban Microsoft campus and visited a high school in Tacoma, where he received a football and a personalized jersey.

Protesters and supporters of Xi holding signs in English and Chinese lined the streets outside Microsoft's Redmond campus and also waited outside the high school.

Though he acknowledged difficulties as China shifts its economy from one driven by exports to one driven by a growing middle class, Xi told the group China's economy will maintain a "steady medium and high speed of growth for a long time."

A big item of concern for the American CEOs is a treaty that would provide a framework for broader investment in the economy of each nation.

All of the American CEOs participating in the forum, organized by the Paulson Institute, signed a letter to Xi and U.S. President Barack Obama urging them to support such a treaty, and they heard encouraging words from Xi on the topic Wednesday.

"Once concluded, the treaty will further ease market access and put in place more open and transparent market rules," he said.

Bilateral investment treaties provide rules for companies doing business in other countries. The agreements can help ensure the rights of foreign investors are protected and that foreign companies operate on a level playing field with domestic ones.

An agreement with China could open up more of that nation's massive market to American companies, provide clearer rules for Chinese investment in the U.S., and create jobs in both countries, supporters say.

"The reason that the U.S. and China have a nearly $600 billion trading relationship, large amounts of U.S. investment in China, and increasing amounts of Chinese direct investment here, is because there are many areas where our national and business interests align," Paulson told Xi at the forum, according to a copy of his remarks.

Representatives from Twitter, Facebook and Google were notably missing from the event. China blocks those companies' websites.

Earlier Wednesday, it was announced that Chinese companies have agreed to buy 300 jets from Boeing.

In addition, state-owned Commercial Aircraft Corp. of China signed a cooperation agreement with the aerospace giant to build a 737 aircraft assembly center in China. That move angered Boeing's unions in Washington state, which fear a loss of U.S. jobs.

Xi arrived in Seattle on Tuesday for a three-day visit before he heads to the White House later this week.

Xi also said China and the U.S. could work together to address cybercrimes, a problem that has sparked mutual tension. He said China was a staunch defender of cybersecurity and also had been a victim of hacking.

Acknowledging that the countries don't always see eye to eye, Xi said China is ready to set up a joint effort to fight cybercrimes.

A meeting Tuesday with governors from five U.S. states and local Chinese officials produced a deal to work on clean energy.