The U.S. trade deficit jumped sharply in August as exports fell to the lowest level in nearly three years while imports increased, led by a surge in shipments of cell phones from China. 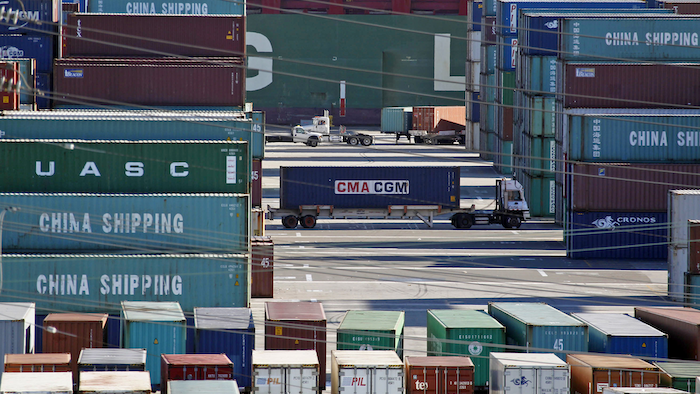 WASHINGTON (AP) — The U.S. trade deficit jumped sharply in August as exports fell to the lowest level in nearly three years while imports increased, led by a surge in shipments of cell phones from China.

The deficit increased 15.6 percent to $48.3 billion, the biggest deficit since March, the Commerce Department reported Tuesday. Exports of goods and services dropped 2 percent to $185.1 billion, the lowest level since October 2012, while imports rose 1.2 percent to $233.4 billion.

Exports have been hurt this year by the rising value of the dollar, which makes U.S. goods less competitive on overseas markets, and weaker economic growth in China and other major export markets. Economists say they expect these trends will combine to push the deficit higher and make trade a drag on overall growth this year.

So far this year, the deficit is running at an annual rate of $531.6 billion, 4.6 percent higher than last year's deficit of $508.3 billion. The higher deficit reflects the fact that weaker global growth and the stronger dollar have reduced exports of U.S. products and cut into the overseas profits of American companies.

Canada, America's largest trading partner, is in a recession and China, the world's second largest economy is growing much more slowly while many emerging market economies are being battered by a plunge in commodity prices.

The United States on Monday reached agreement with Japan and nine other Pacific Rim nations on what would be the largest regional trade pact in history. But the Obama administration will face a major challenge winning congressional approval for the Trans Pacific Partnership trade deal against opponents who argue that the agreement will expose American workers to more unfair foreign competition.

The critics point to America's huge trade deficits to bolster their argument that other nations are manipulating their currencies and pursuing other unfair trade practices that are costing U.S. jobs.

For August, the U.S. deficit with China rose 10.7 percent to $35 billion, the highest level in 11 months. So far this year, the deficit with China, the largest with any trading partner, is running 9.5 percent higher than a year ago, on track to set another annual record.

The deficit with the European Union rose 9 percent in August to $13.6 billion while the imbalance with Japan dipped 9 percent to $5.2 billion.

The drop in exports reflected lower sales of manufactured goods such as computers, industrial machinery and autos and a drop in exports of U.S. energy products, which fell 9.3 percent to $8.1 billion, reflecting the fall in oil prices.

The rise in imports reflected a $2.1 billion jump in the category that covers cell phones with many of those imports coming from China. Imports of telecommunications equipment and food products were also up but imports of oil dropped 11.7 percent to $15.1 billion.