Review: Google Glass Could Be Peek At Tech Future

Google believes it has the perfect accessory for the next phase of technology, the mind-boggling and appearance-shifting category already being described as "wearable computing." 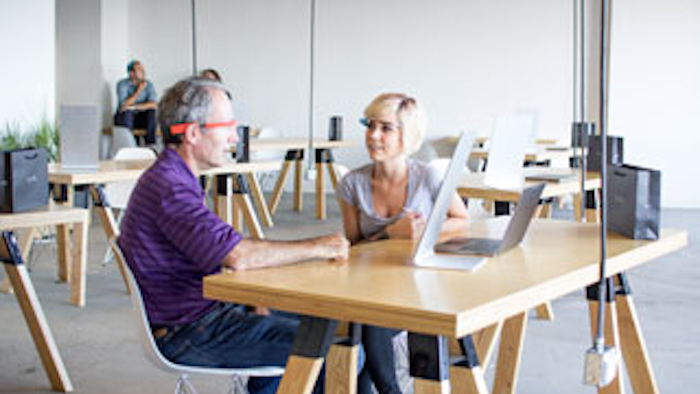 SAN FRANCISCO (AP) — Google believes it has the perfect accessory for the next phase of technology, the mind-boggling and appearance-shifting category already being described as "wearable computing."

The widely anticipated evolution hatched Google Glass, a spectacle-like device that contains a hidden computer, a thumbnail-size transparent display screen above the right eye and other digital wizardry. This Internet-connected headgear is set up to let users receive search results, read email, scan maps for directions and engage in video chats without reaching for a smartphone. Google Glass' grasp of voice commands even makes it possible to shoot hands-free photos and videos.

I got a glimpse of what it's like to wear Glass recently and saw just enough to conclude that it could fashionable, especially as society works out the rules of etiquette for using the device. Although I doubt the device will become as commonplace as the smartphone, I don't think Glass is destined to be remembered as a geeky curiosity that never lived up to its hype.

Google Inc. is touting Glass as a liberating breakthrough that will make technology more convenient and less obnoxious in social situations than checking a smartphone to see what's happening in your digital realm. Critics deride Glass as another disturbing example of a how enslaved people are to their devices and a sign that technology is obliterating personal privacy.

Only about 10,000 people in the U.S. have been given the chance to pay $1,500 to own a test version of Glass as part of Google's "Explorer" program. So I've been eager to get a firsthand look at what all the fuss is about. I finally got a chance last week, when Google invited a few technology reporters and bloggers to test Glass under the company's supervision at a specially equipped San Francisco office that Google calls a "base camp."

Only eight applications from The New York Times, Facebook, Twitter, Path, Evernote, CNN, Tumblr and Elle magazine have been approved for use on the Explorer edition. Unfortunately, none of the Glass models we were allowed to sample were fully loaded with all the applications, or "Glassware," that have been designed for the device. It would have been nice to check them all out. Instead, CNN was the only app available for this test. I also couldn't log into my Gmail to see what that's like on Glass.

Other major limitations were time and physical constraints. I only got to spend about an hour wearing Glass and was confined to using it within Google's base camp and an adjoining patio overlooking the San Francisco Bay.

Glass has potential to be much more than a novelty, especially if Google lowers the price below $500 by the time the company begins selling the device to the general public next year. (The exact date has yet to be determined.)

I also quickly realized that a lot of people will be turned off by Glass, if for no other reason than how they make a person look. Google has strived to imbue Glass with a sense of style by decorating the titanium frames in five different colors: charcoal, tangerine, shale, cotton and sky blue. Glass also weighs about the same as a pair of regular sunglasses, a vast improvement over Google's early prototype of the device, which consisted of a phone attached to a scuba mask.

Glass doesn't actually have any spectacles in the frame, though Google eventually hopes to offer that option for those who wear prescription lenses.

Still, when you first put on Glass and look in the mirror, you probably aren't going to channel your inner Fernando Lamas (or Billy Crystal, for that matter) and say, "You look marvelous." I didn't walk around with Glass on the street, but from what I've heard from people in the Explorer program, they are often greeted with quizzical looks from bystanders who see the tiny display screen above the right eye and figure the device is an optical aid or part of a Cyborg costume. I thought Glass looked best with a sunglass clip-on designed for wearing the device outdoors.

Turning on Glass is done by tapping a finger on the right side of the frame. The device can also be activated by tilting your head upward. Glass users have to turn on the device frequently because it automatically turned off every 30 seconds or so when I wasn't using it. This is meant to save the limited battery life (it only lasts about 90 minutes if you're recording a lot of video, but Google says the battery should be adequate for a full day's use for most people).

Navigating the Glass software requires swiping a finger in a forward or backward direction or an upward or downward direction on the right side of the frame. Remembering the correct direction to swipe to get to a certain set of controls or information was confusing at first, but it didn't take long to get the hang of it.

Glass can connect to the Internet through a Wi-Fi network or by pairing with your smartphone through a Bluetooth connection.

Once online, it's easy to ask Google's search engine for a piece of information. I wondered how the Oakland A's fared in a game earlier that day and Glass promptly delivered the score on a card displayed on the display screen while I carried on a conversation. An automated voice also announced the answer through a bone conduction speaker near my right ear. When I asked Glass for directions to another location in San Francisco, it pulled up a map on the display screen and adjusted my course as I walked in different directions in the room.

The map was quite immersive because even though the Glass screen is small, the display is in high-definition and gives the illusion that you are seeing the image on something much larger. Google likens it to watching a high-definition TV with a 25-inch screen from eight feet away. I didn't have enough time with the device to test that comparison, but there's no doubt the picture on Glass display is crisp. People who are severely near-sighted probably won't be able to see what's on the screen any more clearly than everything else in front of them.

The screen is deliberately aligned slightly above the right eye so it won't prevent users from maintaining eye contact during face-to-face conversations. That means you need to glance upward when you want to look at something on the screen.

Glass' coolest feature is its ability to almost instantly take photos with the device's 5-megapixel camera or record high-definition (720p) videos that provide a startling perspective on how your own eyes see things. This is done simply by saying "OK Glass, take a picture" or "OK Glass, record a video" and the device does it. The images can then be seen on the display screen and, then, with the right app, shared on Twitter or Facebook and stored on your Google Plus profile.

I found myself wishing Glass had been around when my now 18-year-old daughter was a little girl so I could have had pictures and video of so many precious moments that remain in my mind's eye. Many of those moments aren't around in photographic form because they were too fleeting to capture on a handheld camera or camcorder.

It's easy to see why the built-in camera on Glass is raising privacy concerns —even though smartphones already make it easy for people to take a photo or record video at almost any time in just about any situation. Google says Glass isn't that much different. The company has tried to minimize the chances of surreptitious photos or video being taken by ensuring a red light is visible whenever an image is being recorded.

Nevertheless, Glass has already been banned from gambling casinos, movie theaters and some bars to protect against cheating, copyright infringement and privacy intrusions.

I can see how a lot of people aren't going to notice when they're on Glass' candid camera. For instance, I recorded a video of a Google representative discussing the privacy worries about Glass without him noticing. I did it by acting like I was adjusting Glass on my head, allowing me to press on a small button located on the top of Glass' right frame (this technique is an alternative to using the spoken word to command the device).

All in all, Glass looks like it's going to emerge as device that advances technology in ways bound to excite gadget lovers and information junkies while annoying plenty of others who may wish there was an app to transport them to a simpler time.