Honda is making a big push with its new Fit subcompact to get out of being the perennial also-ran of hybrid cars to Japanese rival Toyota, the maker of the Prius. It's a challenge hinged on making the technology affordable. 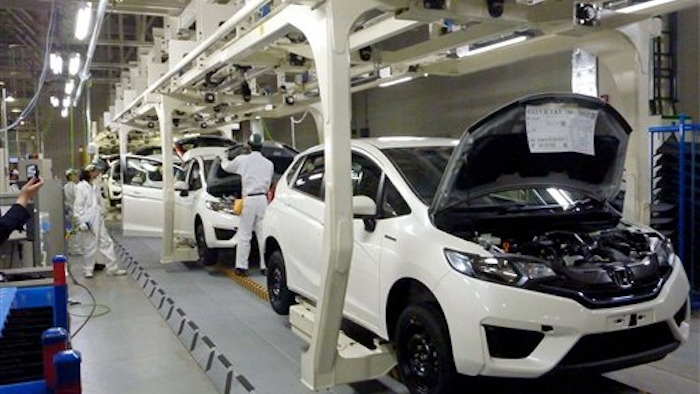 YORII, Japan (AP) -- Honda is making a big push with its new Fit subcompact to get out of being the perennial also-ran of hybrid cars to Japanese rival Toyota, the maker of the Prius.

It's a challenge hinged on making the technology affordable. Hybrids deliver fuel efficiency by switching between a gasoline engine and an electric motor, depending on driving conditions but cost more than gasoline cars. Honda's answer: Lean production.

Honda Motor Co. gave reporters a tour of the Yorii plant this week, ahead of the Tokyo Motor Show, a biannual exhibition of vehicles including the new Fit. The show opens to the media Wednesday. It runs for the public from Saturday through Dec. 1 at Tokyo Big Sight convention hall.

Honda President and Chief Executive Takanobu Ito said the key to hybrid success is to sell in numbers, which works to lower the price, but stressed that green models must increasingly be tailored to regional needs.

"With the hybrid system, you can reach fuel efficiency levels that are impossible with the internal combustion engine," he told reporters, referring to regular gasoline engines. "It's a big step, but hybrids are going to win great acceptance. By 10 or 20 years, there will more and more of them."

The regular Fit is sold in the U.S., but the hybrid Fit is just for the Japanese market for now. Honda is selling bigger hybrid models in the U.S. such as the hybrid Accord and hybrid Acura, Honda's luxury model.

The Yorii plant will serve as a model for Honda production around the world, such as plants in Mexico, Brazil and Thailand, according to the Tokyo-based automaker.

"The Yorii factory is the first step for Honda in making the Fit more of a global hit, especially in emerging markets — and doing that while maintaining profit," said Issei Takahashi, auto analyst at Credit Suisse Securities in Tokyo. "It's an important beginning."

The plant, Honda's eighth in Japan, employs 2,200 workers and has an annual capacity of 250,000 vehicles. It's the first Honda plant to open in Japan since 1990. Its opening was postponed a few years ago because of the financial crisis, but construction was restarted in 2010.

Japanese automakers have been moving production abroad where auto demand is growing, instead of long stagnant Japan. That makes the new Yorii plant a victory of sorts for Honda in Japan, where scoring big with the hybrid Fit is critical for Honda.

Yorii is also aiming to be a model ecological plant, and has solar panels on its roof and nurtures flowers and trees on its site.

Honda showed how a robot in the guise of a big mechanical arm was installing the interior instrument panel and seating on the same assembly line where a human worker was also doing chores. Having a robot alongside the human auto worker is generally too dangerous, and robots in factories are in separate, enclosed areas.

Honda is using just four of these robots for now, but may use them in more numbers in coming years. The robot has sensors and will stop if a person approaches too close.

As with many auto factories around the world today, much of the work such as welding, bending metal parts and installing tires is being done by robots.

At Yorii, the job is getting done with fewer robots by changing the angle they do the work at and other adjustments in the manufacturing process.

"Regardless of how cheap a car is, our responsibility is to deliver both sustainability and mobility," Ito said.