LG Display Co. has developed an 18-inch flexible display that can be rolled into the shape of a thin cylinder, a step toward making a large display for flexible TVs. 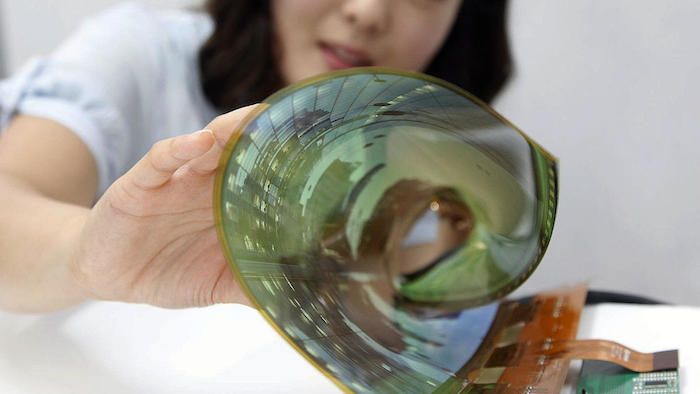 SEOUL, South Korea (AP) -- LG Display Co. has developed an 18-inch flexible display that can be rolled into the shape of a thin cylinder, a step toward making a large display for flexible TVs.

The South Korean display panel maker said Friday the flexible display has a resolution of 1200 pixels by 810 pixels and maintains its function when it is rolled up.

While that resolution would fall within the range of high-definition, images on the display would not look as sharp as the latest flat displays that boast ultra-high definition.

LG touted its technology as a significant advance, saying the cylinder's diameter would be just 6 centimeters (2.4 inches). It means LG Display could produce TVs that are larger than 50 inches diagonally and can be rolled up.

It is based on OLED technology, an advanced display that can show images in richer colors.

South Korean display makers are striving to gain an edge in flexible display technology as they see it as a way to set their products apart from their rivals in China, Taiwan and Japan. They also hope that the novel form would give consumers a reason to buy a new gadget.

Last year, Samsung Electronics Co. and LG Electronics Inc. each released a smartphone with a curved display to show off their technological prowess.

The South Korean company also unveiled a semi-opaque display. Though it is not as transparent as glass, that's the direction that the company is heading. LG named it the transparent display saying its transparency has improved from existing technology.

By 2017, LG aims to develop a flexible and transparent display that measures more than 60 inches diagonally, Kang In-byung, head of LG Display's R&D Center, said in a statement.