The world's biggest smartphone maker is suffering a stunning financial decline in the face of intense competition from Apple Inc. and upstart Chinese brands. 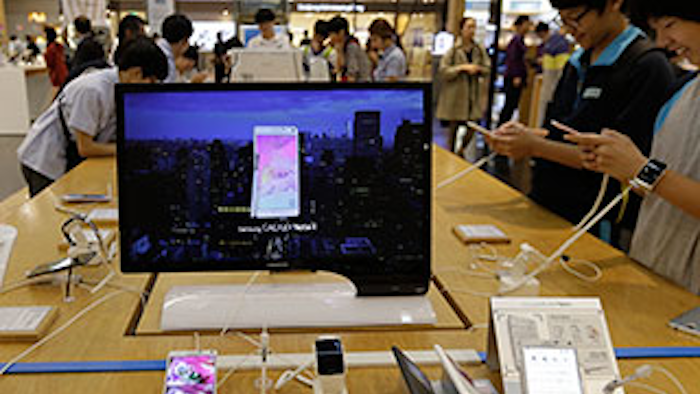 In a preview to earnings due out this month, Samsung Electronics Co. said Tuesday its quarterly profit is estimated to have fallen to its lowest level in more than three years, dragged down by weak sales of its new Galaxy model.

Samsung became the biggest smartphone brand on the popularity of earlier Galaxy models. But the bigger screen on Apple's new iPhone 6 is luring away Americans who liked the bigger Galaxy, while in China, local brands are making inroads into Samsung's business.

Analysts have repeatedly cut forecasts of Samsung's profit this year as Galaxy sales lagged expectations. They say earnings in the quarter ending in September could suffer their biggest decline in Samsung's recent history.

In Tuesday's report, Samsung said the median forecast of July-September operating income was 4.1 trillion won ($3.8 billion). That was below the median of analysts' expectations of 5.2 trillion won, according to FactSet, a financial data provider. It would be a 60 percent plunge from record-high 10.2 trillion won a year earlier.

The decline in Galaxy sales has hurt demand for Samsung components such as an advanced display called OLED. High marketing costs are undermining profits.

Analysts say the bigger iPhones released last month will likely take away American customers who favored the Galaxy's bigger screens. In emerging markets such as India and China, Samsung's smartphone sales were overtaken by local rivals.

Samsung estimated sales for the July-September period declined 20 percent from a year earlier to 47 trillion won ($44.2 billion). That was slightly below analysts' expectations of 50.4 trillion won.

In January, analysts estimated Samsung's third quarter operating income would exceed 10 trillion won. That expectation has been steadily lowered to about half this month.

Quarterly profit from its mobile business, which reached 6.7 trillion a year earlier, is forecast to be a little over 2 trillion won.

"Rather than seeking stability, Samsung should seek to distinguish (its phones) with Galaxy's design policies," he said. "The iPhone 6 will be a significant threat to Samsung."

The company moved the launch of the Galaxy Note 4, a large smartphone with a stylus, to late September from October after Apple unveiled the iPhone 6. It also began sales of the Galaxy Note 4 in China last month, getting an early start in the world's most populous country before Apple.

Last month, Samsung also received upbeat initial responses to its Galaxy Note Edge smartphone, a smartphone with a curved side screen that can display weather, news, apps and other information. But the supply volume for the Edge smartphone will be limited, likely not giving a big boost to its earnings, analysts said.

With growth momentum in smartphones sagging, Samsung is moving to step up its presence in the semiconductor business.

This week, Samsung announced a 15.6 trillion won ($14.7 billion) investment plan to build a new semiconductor fabrication plant in the South Korean city of Pyeongtaek. The construction will begin before the summer next year and begin operations during the second half of 2017.

Samsung did not disclose net income or divisional earnings in its quarterly earnings preview.

5 Killed In Blast At Fireworks Plant