A solar-powered aircraft has completed the final leg of a history-making cross-country flight, gliding to a smooth stop at New York's John F. Kennedy International Airport. The Solar Impulse touched down at JFK Saturday, completing the final leg of the cross-continental journey that started in California in early May. 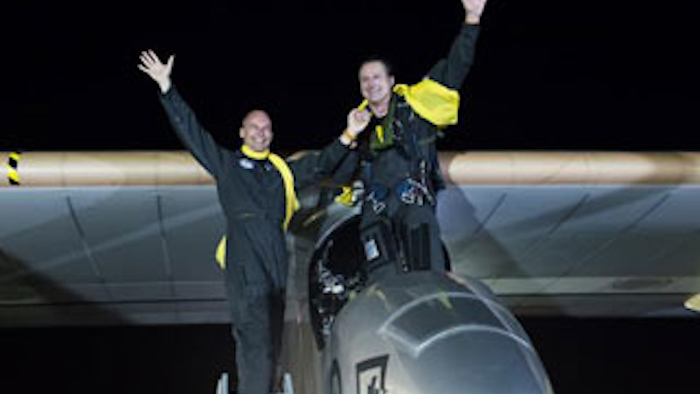 The Solar Impulse touched down at JFK at 11:09 p.m. Saturday, completing the final leg of the cross-continental journey that started in California in early May. For Saturday's final leg, the aircraft left Dulles International Airport a little before 5 a.m.

The flight plan for the revolutionary plane, powered by some 11,000 solar cells on its oversized wings, had called for it to pass the Statue of Liberty before landing early Sunday at New York. But an unexpected tear discovered on the left wing of the aircraft Saturday afternoon forced officials to scuttle the fly-by and proceed directly to JFK for a landing three hours earlier than scheduled.

Pilot Andre Borschberg trumpeted the milestone of a plane capable of flying during the day and night, powered by solar energy, crossing the U.S. without the use of fuel.

"It was a huge success for renewable energy," Borschberg said while standing in front of Solar Impulse on the runway at JFK. "The only thing that failed was a piece of fabric."

Bertrand Piccard, the other pilot who took turns flying the Solar Impulse across the United States, said the flight across the country tested the entire project team.

"Flying coast-to-coast has always been a mythical milestone full of challenges for aviation pioneers," Piccard said. "During this journey, we had to find solutions for a lot of unforeseen situations, which obliged us to develop new skills and strategies. In doing so, we also pushed the boundaries of clean technologies and renewable energies to unprecedented levels."

Borschberg noticed balance issues with the wing in the early afternoon Saturday off the coast of Toms River, New Jersey, said Alenka Zibetto, a spokeswoman for Solar Impulse.

Officials said the pilot and aircraft didn't appear to be in danger. They said the eight-foot tear on the lower left side of the wing wasn't expected to worsen through the final portion of the trip.

"It was supposed to be the shortest and easiest leg," Piccard said. "It was the most difficult one."

Piccard said in addition to the wing issue, another problem with the landing was Borschberg's lack of air breaks to avoid making turbulence in the wing with the tear.

Despite the relatively short distance, Saturday's commuter-like hop was a long flight that lasted 18 hours and 23 minutes. The slow-flying aircraft was traveling between two of the world's busiest airports and was required to take off very early in the morning and land very late at night, when air traffic is at a minimum.

"This is a leg where everybody is quite moved," Piccard said shortly after the plane was in the air over Washington early Saturday.

The aircraft soars to 30,000 feet (9,000 meters) while poking along at a top speed of 45 mph (72 kph). Most of the 11,000 solar cells are on the super-long wings that seem to stretch as far as a jumbo jet's. It weighs about the size of a small car, and soars with what is essentially the power of a small motorized scooter.

The Solar Impulse left San Francisco in early May and has made stopovers in Phoenix, Dallas-Fort Worth, St. Louis, Cincinnati and Dulles.

The cross-country flight is a tuneup for a planned 2015 flight around the globe with an up-graded version of the plane.

Solar Impulse's creators view themselves as green pioneers — promoting lighter materials, solar-powered batteries, and conservation as sexy and adventurous. Theirs is the high-flying equivalent of the Tesla electric sports car.

Europe saw the solar plane first with a test flight from Switzerland and Spain to Morocco last year.

Promoted as solar-powered, what really pushes the envelope with this plane is its miserly energy efficiency, Borschberg said before the flight.

U.S. Trade Deficit Widens To $45B In May