Nine out of 10 executives at small and mid-size manufacturing and distribution companies expect solid growth over the next 12 months and two-thirds plan to add jobs during that period, according to new survey. 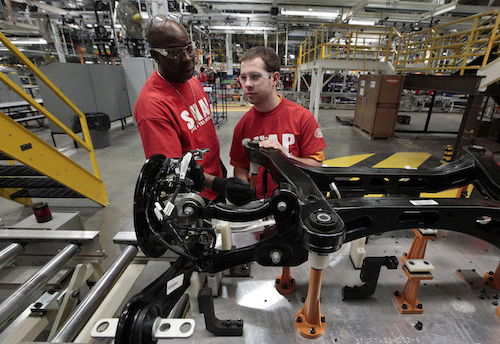 CHICAGO  – Nine out of 10 executives at small and mid-size manufacturing and distribution companies expect solid growth over the next 12 months and two-thirds plan to add jobs during that period, according to the 2014 McGladrey Manufacturing and Distribution Monitor. The survey, which was conducted by McGladrey LLP, the leading provider of assurance, tax and consulting services focused on the middle market, includes responses from more than 900 executives at small and mid-size U.S. manufacturers and distributors, and provides an annual update on the state of middle-market companies in the industrial sector.

In 2014, industrial sector executives report that they are already coming off a strong year but expect even better results over the next 12 months. While an already-healthy majority of executives (69 percent) reported increases in domestic sales over the past year, 88 percent expect the next 12 months to bring further growth, with an average projected increase of eight percent. In addition, two-thirds (67 percent) reported that they expect their profit (before taxes and interest) to rise over the next year, with nearly a quarter (24 percent) expecting increases of more than 10 percent.

The survey indicates that these expected bottom line improvements will also mean good things for the job market. Two-thirds of respondents (67 percent) indicated that they expect to hire more employees in the U.S. over the next year, up from 62 percent in 2013. The average expected increase in U.S. employees was six percent, up from four percent in 2013. Importantly, the number of executives expecting to cut back in U.S. employment dropped to five percent after hovering between 9 percent and 11 percent for the past three years.

“This year’s survey suggests that we will be celebrating more than just improved balance sheets over the next twelve months,” said Karen Kurek, national  industrial products practice leader for McGladrey. “Not only are we seeing a healthy majority of executives planning to turn improved financial results into more jobs, we are seeing a significant drop in the number of companies expecting to cut employees for the first time in several years, suggesting that the influence of the economic downturn may truly be waning.”

Despite this positive outlook, executives indicated that they continue to face headwinds that could be holding them back from even further growth. As was the case with last year’s survey findings, regulatory issues topped the list of concerns this year, with two-thirds (66 percent) of respondents expecting their growth to be limited by regulation over the next year – a concern that is more challenging, according to survey participants, than competition from other companies (63 percent). Implementation of the Affordable Care Act (ACA) topped the list of specific regulatory roadblocks, with 69 percent of executives reporting that they expect it to limit growth over the next year. Other frequently cited regulatory impediments included Environmental Protection Agency rules (50 percent), state regulation (52 percent), and the tapering of the federal stimulus program (39 percent).

Taxation was the third-most frequently cited roadblock to growth in the 2014 Monitor, with more than 60 percent of executives expecting that it will limit their growth over the next year. As many mid-size firms are organized as pass-through entities and thus have their earnings taxed as individual income, the survey found that executives see federal business taxes (61 percent), state business taxes (60 percent) and federal income taxes (50 percent) as major impediments to growth. The survey also found that executives predict negative impacts from the uncertainty around several currently expired tax-breaks, including bonus depreciation (47 percent) and the research and development tax credit (39 percent).

“There is no question that the industrial sector is growing, but industry executives clearly believe it could be growing more quickly,” said Kurek. “Manufacturing and distribution executives have made it clear that they are being held back by a regulatory and tax landscape that seems to grow both more complicated and less certain each year. With the recession now comfortably in our rear-view mirror, regulations and taxes have become the top challenges for manufacturers and distributors, and it will continue to influence the growth and competitiveness of the industry until it is addressed.”

In addition to these key business climate trends, the 2014 Monitor provides insights on a wide range of critical issues in the industrial sector. Other important findings in this year’s report include:

Details about the 2014 McGladrey Manufacturing and Distribution Monitor Survey can be found on the McGladrey website, where you can also watch the video.

10 Arrested During Protest At Google