Samsung is facing a fresh accusation that one of its China suppliers hired children to meet production targets during a period of high demand from the South Korean electronics giant. 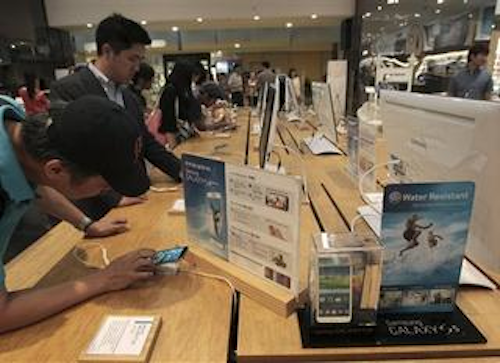 SEOUL, South Korea (AP) -- Samsung is facing a fresh accusation that one of its China suppliers hired children to meet production targets during a period of high demand from the South Korean electronics giant.

Samsung Electronics Co. said Thursday it is looking into the allegation by China Labor Watch that its supplier Shinyang Electronics in Dongguan hired children and student workers under the legal working age.

The New York-based labor watchdog said children were hired during a busy production period, worked for 11 hours a day without overtime pay and without social insurance. They usually left employment after three to six months when demand from Samsung declined, but without any severance pay.

The accusation conflicts with Samsung's recent report on conditions at suppliers. It said no child labor was found by an external audit last year of about 100 Chinese suppliers.

That audit found 59 suppliers that did not provide safety equipment to employees. It also said excessive working hours were commonplace.

China Labor Watch said in 2012 that Samsung was turning a blind eye to child labor at its suppliers in China where billions of Apple Inc. and Samsung smartphones are assembled. The 2012 report also said working conditions at Samsung suppliers were "inhumane," citing workers laboring beyond legally permitted hours and other problems.

Then, Samsung promised to eliminate illegal overtime and other labor violations. It began to detail its efforts to remove child workers, such as introducing a new hiring process with strict identity checks at its suppliers in China. Samsung said it would sever its relationship with companies that continued to fail to abide by its code of conduct.

There are hundreds of Samsung suppliers in China.

Executive Director Li Qiang said the company's reports are meant to reassure investors and don't have any value for workers.

"Samsung's monitoring system is ineffective and has failed to bring about improvements for workers."

Samsung said it and a third party auditor conducted three inspections of Shinyang Electronics in 2013 and 2014 but did not find child labor during those audits. It reiterated that it has zero tolerance for child labor.

The company said it was "urgently" looking into the allegations.

China: It's Up To U.S. To Drive Global Economy