Nissan North America will build a 1 million-square-foot campus for its suppliers just north of the company's vehicle assembly plant in central Mississippi. 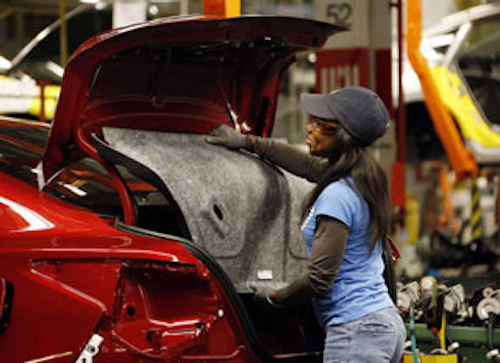 Gov. Phil Bryant and Nissan officials spoke Tuesday during a groundbreaking ceremony Tuesday near Canton. The manufacturing plant opened in 2003 and is about 15 miles north of Jackson, facing Interstate 55. The new supplier park will not be visible from the interstate.

"Thank you, Nissan, for believing it can be Mississippi made," Bryant said in remarks to about 100 people in the field where the supplier park will be built.

Earlier this year, Mississippi lawmakers approved a bill to allow the Madison County Economic Development Authority to use $100 million in bonds toward construction of buildings to be used by suppliers of the Nissan plant.

Dan Bednarzyk, Nissan vice president for total delivered cost, said Tuesday that the project will support more than 800 jobs, including an expected 400 new supplier jobs and 400 employees that Nissan has hired since June 1 in anticipation of the project.

"Today, Nissan begins an exciting new chapter in this state as we continue our localization efforts in the United States," Bednarzyk said during the ceremony. "This groundbreaking event supports our efforts to bring more Nissan cars and trucks to our plant in Canton, Miss., and all of that equates to more Mississippi jobs as well as investment."

By 2015, 85 percent of all Nissan vehicles sold in the United States will be built in North America, Bednarzyk said. The current figure is 69 percent.

Nissan said infrastructure improvements will also be made to the current supplier logistics center building located at the south end of the manufacturing plant.

Nissan now makes seven vehicles at the Canton plant: the Armada and Xterra SUVs, the Titan and Frontier pickup trucks, the NV van, and the Altima and Sentra sedans. The company announced in January that it would start making the Murano crossover vehicle in Canton in late 2014, adding 400 jobs to its current total of about 5,200.

Mississippi has given Nissan incentives worth more than $378 million. One recent study places the total over time at more than $1 billion including tax breaks. Nissan has invested about $2 billion at the Canton site in the past decade, Bryant said.

During the groundbreaking ceremony Tuesday, Bryant defended the state's practice of giving incentives for economic development projects, saying they help create jobs that improve the quality of life.

"We are going to keep doing it," Bryant said.