The Janet Yellen era at the Federal Reserve begins in earnest this week with a two-day meeting, a policy statement and fresh economic forecasts.  No major announcements are expected when the meeting ends, but analysts think the Fed may drop any reference to an unemployment rate that might cause it to eventually raise short-term rates. 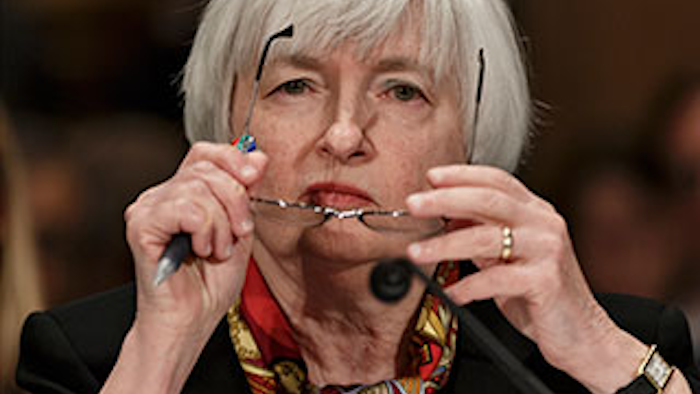 WASHINGTON (AP) — The Janet Yellen era at the Federal Reserve begins in earnest this week with a two-day meeting, a policy statement and fresh economic forecasts. Yet all that will be a prelude to the marquee event: Yellen's first news conference as Fed chair.

The financial world will be parsing every word for any hint of a policy shift.

Or, as some speculate, might she prove even more inclined than Bernanke to favor low rates to try to accelerate job growth, even at the risk of high inflation?

No major announcements are expected when the meeting ends Wednesday. But many analysts think the Fed could make one change in its statement: They think it may drop any reference to an unemployment rate that might cause the Fed eventually to raise short-term rates. Eliminating that reference would help the Fed maximize its flexibility on rates.

The Fed's most recent policy statement said it planned to keep short-term rates at record lows "well past" the time the unemployment rate falls below 6.5 percent. The rate is now 6.7 percent. But several Fed officials have recently suggested scrapping the 6.5 percent threshold and instead describing more general changes in the job market and inflation that might trigger a rate increase.

Charles Evans, president of the Federal Reserve Bank of Chicago, said last week that there's "not a large expectation" that the 6.5 percent threshold will remain much longer, a point also made recently by William Dudley, president of the New York Fed.

One reason for dropping the threshold, as Yellen among others have noted, is that the unemployment rate can overstate the job market's health. In recent months, for example, the rate has fallen not so much because of robust hiring but because many people without a job have stopped looking for one. Once people stop looking for a job, they're no longer counted as unemployed, and the rate can fall as a result.

"There is a growing consensus to go with more nuance instead of a specific number," said Diane Swonk, chief economist at Mesirow Financial. "I think they are just too close to 6.5 percent on the unemployment rate."

Yellen, who was sworn as chair on Feb. 3, has spoken of seeking continuity with Bernanke, under whom she served as vice chair. That's partly why the Fed will likely announce this week a third reduction in its monthly bond purchases. Those purchases have been intended to keep long-term loan rates low to encourage spending and growth.

In December and in January, the Fed cut its monthly pace of bond buying from an original $85 billion in $10 billion increments to $65 billion. If the economy keeps improving, the Fed will likely keep paring its bond purchases until ending them altogether in December.

The pullback is expected to occur despite challenges the U.S. economy and financial markets face, from a brutal winter that's depressed growth, to fears about how Russia's aggression toward Ukraine might slow the global economy.

Still, Fed officials, including Yellen, have signaled their belief that the weakness in U.S. economic data is temporary rather than a sign the economy is losing momentum.

The Fed and most private economists foresee faster economic growth in 2014. Many think the economy, which grew a lackluster 1.9 percent in 2013, will rebound to around 3 percent this year.

"We had a tough start to the year with the winter storms, but it looks like we are starting to pull out of those weather effects," said David Jones, chief economist at DMJ Advisors.

Economists point to several hopeful signs — from a rebound in retail sales to an increase of 175,000 jobs in February despite continued harsh weather.

Even if the economy strengthens and the Fed ends its bond purchases late this year, it will still be stimulating the economy. It has no plans to start selling its enormous portfolio of bonds — a step that would likely send loan rates up. Nor is it likely this year to raise the benchmark short-term rate it controls.

More than five years ago, the Fed cut that rate to a record low near zero, where it's remained since. Most analysts think the Fed will keep its target for short-term rates near zero until late 2015.

One reason the Fed may choose this week to drop its mention of a 6.5 percent unemployment rate as a threshold for an eventual rate increase is that Yellen will hold a news conference. Her question-and-answer session with reporters would allow her to explain the Fed's reasoning for any change.

Under a plan established by Bernanke, the Fed's chair holds news conferences after four of the eight meetings each year. The next news conference isn't scheduled until June.

Not all economists expect the Fed this week to drop a link between a specific unemployment rate and an eventual rate increase.

"I don't think they will tweak the language," said Brian Bethune, an economics professor at Tuft University. "There is enough wiggle room currently."

Toyota Shuts Down 2 Plants In India Over Wages

U.S. Lags Behind As Commercial Drones Take Off Globally