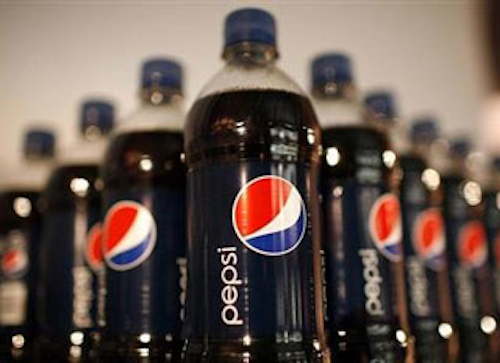 Such a deal would create a global snack food powerhouse, bringing together salty bites such as Cheetos, Doritos and Lay's potato chips with sweet treats such as Cadbury chocolates and Trident gum.

During an interview Wednesday on CNBC, Peltz of Trian Fund Management said he talked about the proposal he called "Plan A" with PepsiCo CEO Indra Nooyi. He said he has a meeting planned with Mondelez CEO Irene Rosenfeld in the next couple of weeks.

"Pepsi right now doesn't love the deals," Peltz conceded. He then urged shareholders to write to the company in support of his proposal.

Under the deal he outlined, PepsiCo would pay $35 to $38 per share for Mondelez.

Peltz is known for building stakes in companies then forcing change. In 2008, for example, he led a group of investors in pressuring Cadbury Schweppes to split its candy and its weaker beverage business, which later became Dr Pepper Snapple Group Inc. He was also an active investor in Kraft Foods Group Inc. before its split from Mondelez.

As of March 31, Peltz had a $1.23 billion stake in Mondelez and a $951.8 million stake in PepsiCo, according to a filing with the Securities and Exchange Commission.

Although it's best known for its sodas, PepsiCo is also the world's biggest salty snacks maker. If it were to spin off its beverage unit, analysts have speculated the company would want to gobble up another company to remain as big as it is today.

Even if the Mondelez acquisition weren't to happen, Peltz said his "Plan B" would be to have PepsiCo nevertheless disentangle its promising snacks business from its lackluster soda business. Otherwise, he said that its snacks would always be overshadowed by its drinks, which have perennially trailed Coca-Cola Co.

The proposals by Peltz highlight the pressures PepsiCo has been under to improve results in its beverage unit. The company, based in Purchase, N.Y., has significantly stepped up marketing for its flagship soda. It signed a wide-ranging deal with pop star Beyonce, as well as a multi-year contract to sponsor the Super Bowl. But the efforts have yet to pay off, with sales volume in North America remaining a drag on the company.

"Pepsi is at a crossroads," Peltz said.

In a statement, PepsiCo said it was making "significant progress" against its goals and that it was confident in its ability to deliver value as "an integrated food and beverage company."

The company is set to report second-quarter results next week.

Mondelez meanwhile has struggled as well, after separating from Kraft Foods last October. The company's first few quarters as an independent company have been disappointing and Rosenfeld has admitted that she made some missteps out of the gate. During the CNBC interview, Peltz said he thought Rosenfeld was "running out of time" with investors.

In an aside, Peltz also noted his distaste for the made-up name of Mondelez.

"It sounds like a disease — 'suffering from Mondelez'," he said.

Mondelez said in a statement that it looks forward to meeting with Trian Fund Management about its ideas in greater detail.