Mark Hogan, a former General Motors Co. executive tapped to join the Toyota board, sees his appointment as a sign of change at the Japanese automaker and hopes he'll play a role in the company becoming less insular and quicker in decision making. 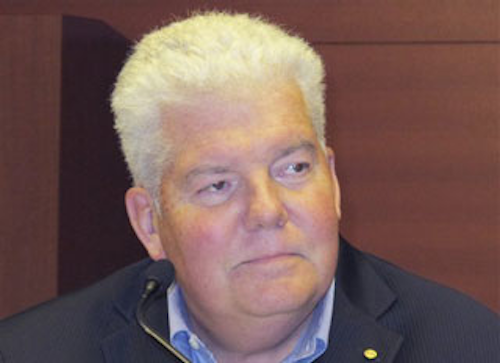 NAGOYA, Japan (AP) -- Mark Hogan, a former General Motors Co. executive tapped to join the Toyota board, sees his appointment as a sign of change at the Japanese automaker and hopes he'll play a role in the company becoming less insular and quicker in decision making.

Hogan's appointment, announced in March and approved by shareholders last month, is the first time in Toyota's 76-year history that it has appointed a director from outside the company.

His arrival underlines efforts at Toyota Motor Corp. under President Akio Toyoda to become more international, transparent and nimble in regional markets, as it recovers from recent difficult years including a massive recall fiasco in the U.S.

"I give Akio a lot of credit for having the leadership to do that," he told reporters Tuesday at Toyota's Nagoya office.

"I see my role as listening to global voices outside of Japan and sharing insights that will help Toyota respond more quickly to changes in society," Hogan said.

When asked if he would have advised Toyota do anything differently during the massive recall crisis in the U.S. five years ago, Hogan stressed recall woes were not unique to Toyota but spanned the entire auto industry in recent decades. He said the lesson learned for Toyota was that a crisis needs a speedy response.

Hogan, an American, joined GM in 1973, and became group vice president in 2002. He worked with Toyoda more than a decade ago at NUMMI, or New United Motor Manufacturing, a California auto plant jointly run by Toyota and GM. During his nearly one hour news conference, his first as board member, 62-year-old Hogan stressed his friendship with Toyoda, often referring to him as Akio. He said they meet every month these days to share ideas.

Issei Takahashi, auto analyst with Credit Suisse in Tokyo, said having someone close to GM on Toyota's board may help it lobby against any protectionist efforts by U.S. automakers.

Japan is planning to join the "Trans-Pacific Partnership," an Asia-Pacific trade pact, a move that is likely to help Toyota and other Japanese exporters in the U.S.

Some officials in the U.S. auto industry are already crying foul, noting American cars make up only a tiny portion of the Japanese market.

"Having someone on the team with an 'in' with the American auto industry could work as a plus for Toyota," Takahashi said.

Hogan did not directly address the issue of American protectionism. But he repeatedly stressed he knew both Toyota and GM well.

"Toyota has always admired and learned valuable insights from Detroit automakers and their partners. And I've worked in those circles for many years," he said.

Hogan said about half of Toyota's sales were now in emerging markets, and so it needed "a global perspective."

Toyoda has been trying to empower regions within the global company, the world's biggest in vehicle sales, setting up divisions to each oversee North American, European, Japanese and emerging markets.

Besides getting Hogan on board, Toyota promoted four non-Japanese managers to oversee regional businesses, including James Lentz, an American who already leads Toyota Motor Sales in the U.S. He will head the North American region.

Like other conservative Japanese companies, Toyota had been more of a closed shop than its Western counterparts, and had not been open in the past to the idea of board members from outside company ranks.

It learned its lesson the hard way with the massive global recalls over sticky gas pedals, faulty floor mats, problematic brakes and other defects that spanned several years from 2009 and affected more than 14 million vehicles. The recalls tarnished Toyota's reputation for quality, especially in the U.S.

Hogan was upbeat about Toyota's prospects in South America, including Brazil and Argentina, a region where Hogan has experience, and has always wondered why Toyota was lagging.

"I used to kid Akio about that," he said.

Toyota has had a foreigner on its board just once in the past, in 2007, with Jim Press, an American who had headed Toyota's North American operations. Press left shortly afterward for a job with Chrysler.

Besides quality lapses, Toyota has had its share of other disasters in recent years, including the 2011 earthquake and tsunami in northeastern Japan and flooding in Thailand that followed. Both disasters destroyed key suppliers and hobbled Toyota's production. But Toyota has bounced back quickly and is back on a growth track.