A closely watched survey has raised hopes that the laggard of the global economy — the 17-country eurozone — may be growing again. 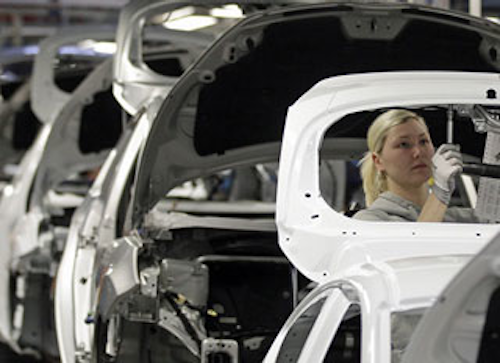 LONDON (AP) -- A closely watched survey has raised hopes that the laggard of the global economy — the 17-country eurozone — may be growing again.

Financial information company Markit said Wednesday that its monthly purchasing managers' index — a broad gauge of economic activity — for the eurozone rose for the fourth month running, to 50.4 points in July from 48.7 the previous month. The increase reflected improvements in both the manufacturing and services sectors.

That's the first time in 18 months that the survey rose above 50, the threshold that separates growth from contraction. The increase was also larger than anticipated — the consensus in the markets was for a more modest increase to 49.1.

Even so, Rogers said a "real recovery remains a long way off," with jobs continuing to be shed in a number of countries in the region and amid tight bank credit conditions for companies. The European Central Bank has unveiled a new plan to boost lending to firms, but it's unclear how long it will take to have an impact.

"Much more remains to be done by both the ECB and governments if the recovery in the coming 12-18 months is not to be weak and prone to setbacks," Rogers said.

Still, the PMI figures will raise hopes that the recession in the eurozone, which has lasted since the fourth quarter of 2011, is coming to an end. The recession has been largely due to the difficulties afflicting many of the countries at the forefront of Europe's debt crisis, such as Greece, Portugal and Spain. However, some of the bigger economies, including Germany, have also come off the boil in recent quarters as they feel the impact of the weak economy among key trading partners in Europe.

Wednesday's figures showed solid improvements for Germany and France, the single currency bloc's two largest economies. Official figures for the second quarter are due next month and some economists think they may show the eurozone recession has come to an end.

"In all, then, there are some signs that the eurozone economy is on the mend and might perhaps soon exit recession," said Ben May, European economist at Capital Economics. "Nonetheless, the PMI and other business surveys have signaled several false dawns in the recent past."

While the eurozone sank back into recession, the world's other leading economies fared better. The U.S. economic recovery is strong enough that the Federal Reserve is considering tightening its super-easy monetary policy, while Japan's long-stagnant economy is showing signs of responding to stimulus efforts by the government and central bank. China's economy has been slowing down, although it was still expanding at a strong annual rate of 7.5 percent in the second quarter.

MAPI Global Outlook: Back From The Brink?