Dell's Board Deals Blow To CEO's $24.4B Buyout Bid

Dell's board rejected CEO Michael Dell's attempt to change the voting rules for his bid to buy the slumping personal computer maker, a decision that is likely to doom the deal. 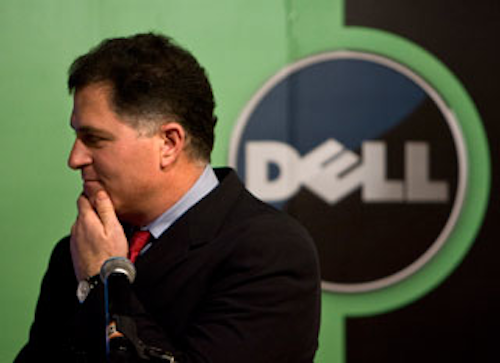 SAN FRANCISCO (AP) — Dell's board rejected CEO Michael Dell's attempt to change the voting rules for his bid to buy the slumping personal computer maker, a decision that is likely to doom the deal.

But the endangered buyout could still get a reprieve if Michael Dell and his allies accept a counterproposal that would extend the voting period for a third time and allow a bigger pool of shareholders to cast ballots.

The rebuff announced Wednesday marks the latest blow that Michael Dell and his main backer, Silver Lake Partners, have absorbed since reaching an agreement with Dell Inc.'s board nearly six months ago to buy the Round Rock, Texas, company for $24.4 billion, or $13.65 per share.

A vote on Michael Dell's offer is scheduled to be held Friday. He had proposed a change designed to make it easier for that bid to win shareholder approval: In exchange for an extra $150 million, Michael Dell wanted to exclude shareholders who didn't vote from being counted as in the opposition column.

Dell's board turned down that demand, but said it's willing to postpone Friday's vote and give shareholders several more weeks to consider the buyout proposal if Michael Dell and Silver Lake don't withdraw the slightly higher offer of $24.6 billion, or $13.75 per share, dangled before the company last week.

The original bid has faced stiff criticism from a vocal camp of critics led by two of Dell's largest shareholders, billionaire Carl Icahn and investment firm Southeastern Asset Management, who want to oust Michael Dell as CEO and replace the company's entire board to pursue different alternatives.

"Michael Dell is facing a real uphill battle now, but it seems like things are changing just about every day," said analyst Shannon Cross of Cross Research.

Investors Wednesday appeared resigned to the deal unraveling. The company's stock fell to its lowest levels since the buyout agreement was announced in early February. The shares shed 20 cents to close at $12.66 after falling as low as $12.28 during the session.

A slightly different set of shareholders would be able to weigh in on the higher offer because the board said it's prepared to change the voting eligibility in a small concession to Michael Dell and Silver Lake. The voting is currently confined to shareholders who held stock as of June 3, a date that locks out investors who have bought stock after that. If Michael Dell keeps the higher bid on the table, the board would open the voting up to shareholders owning stock through a date in early August that has yet to be determined.

Redefining the pool of shareholders eligible to vote on Michael Dell's bid could be crucial to the deal's fate. The agreement that he signed in February required a majority of all outstanding shares, excluding Michael Dell's nearly 16 percent stake in the company, to approve the deal. That means shareholders who don't vote are considered to be against the deal.

Under the current eligibility standards, a significant number of investors who bought stock after June 3 can't vote. Redefining the eligibility rules would allow those investors to weigh in on the deal and give Michael Dell more time to make the case for accepting his bid at the slightly higher price.

A new meeting would likely be scheduled for some time in late August or early September. Icahn and Southeastern Asset railed against that idea in a Wednesday letter to Dell's special committee.

"Enough!" the letter said. "The stockholders have spoken — and they do not want to be frozen out by Michael Dell/Silver Lake. Let the vote happen on Friday." If the vote is delayed, Icahn demanded that the company's annual meeting be held on the same date so he can pursue his crusade to dump the company's current board.

It's not clear the higher bid will remain on the table because Michael Dell wanted more significant changes than the board is offering. He has said he and Silver Lake only tacked on the extra 10 cents per share to get the rules changed so that only shareholders who vote determine the outcome of the bid. By Michael Dell's estimate, about 27 percent of Dell Inc.'s outstanding shares hadn't voted as of last week when the board committee postponed the final balloting for the second time. Under the current rules, those non-votes would be counted against his bid.

Michael Dell and Silver Lake described their higher offer as their "best and final" proposal. In a letter to shareholders, Michael Dell wrote that he would be "at peace" if is prevented from buying the company that he founded in college nearly 30 years ago.

Dell spokesman David Frink declined to comment on Wednesday's developments. He said Michael Dell and Silver Lake would review the proposal from the company's special board committee.

Michael Dell's bid has been attacked by Icahn, Southeastern Asset Management and other critics as an attempt to buy one of the world's largest technology companies at a bargain price. Dell Inc.'s stock has fallen by more than 40 percent since Michael Dell returned for a second stint as CEO in early 2007, just as Apple Inc. was getting ready to release the iPhone. That device launched a new era in computing that has seen a growing number of people rely on smartphones and tablets for everyday tasks that used to be done on laptop and desktop machines.

Like most other major PC makers, Dell got caught off guard by the shift and has been scrambling to adapt while its revenue and earnings have been drooping.

Michael Dell believes he can turn around Dell by spending heavily to build better tablets, while also diversifying into more profitable areas of technology, such as business software and data storage. He contends those changes likely will be tumultuous and easier to tolerate if the company no longer has to answer to other shareholders. Dell Inc. would become privately held for the first time in 25 years if Michael Dell's bid prevails.

If Dell Inc. isn't sold, analysts believe the company's stock might retreat to where it stood in the months leading up to the deal with Michael Dell and Silver Lake. The shares sunk to $8.69 in November, its lowest level since the depths of the Great Recession in March 2009.

In his letter to shareholders last week, Michael Dell said he won't back Icahn's plan. He also has indicated he intends to remain CEO of the company even if his buyout offer fails.