Back in January 2010, President Barack Obama set a lofty goal of doubling U.S. exports in five years. With just 18 months to go to 2015, that target seems to be slipping beyond reach and has vanished from White House talking points. 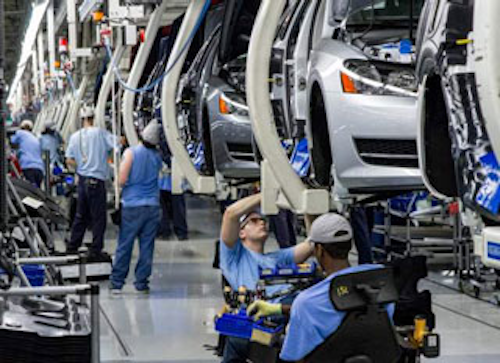 WASHINGTON (AP) -- Back in January 2010, President Barack Obama set a lofty goal of doubling U.S. exports in five years. With just 18 months to go to 2015, that target seems to be slipping beyond reach and has vanished from White House talking points.

Monthly export numbers have been mostly stagnant this year. And only a scant 6,000 manufacturing jobs were added last month, according to Labor Department jobs statistics released Friday.

Obama and administration officials counter by asserting that 7.2 million jobs — 500,000 of them in manufacturing — have been added since job losses bottomed in March 2010, two months after Obama set his doubling-exports goal.

"Over the past four years, for the first time since the 1990s, the number of manufacturing jobs hasn't gone down. It's gone up. Now we have to build on that progress," Obama said this week in Chattanooga, Tenn., after similar stops in Illinois, Missouri and Florida the week before.

Actually, the number of overall manufacturing jobs has changed little over the past 12 months.

Those 500,000 "new" manufacturing jobs have been cited before by Obama, going back to his acceptance speech at the Democratic National Convention last September. The lack of a significant progress since then underscores how hard it will be to reach his goal of doubling U.S. exports by the end of next year.

Obama's boasts of job gains also ignores the millions of jobs, including hundreds of thousands manufacturing ones, that were lost in the early months of his presidency and in the final year that George W. Bush was president. Obama cherry-picked his starting point, making it the 2010 employment trough.

He is proposing lowering the corporate tax from 35 percent to 28 percent. As a special incentive for manufacturers, he would set a rate of 25 percent for companies "that bring jobs back to America." In exchange, he wants to pair changes in tax laws with new domestic spending.

Republicans balked at those strings attached.

The worst recession since the Depression began in December 2007 and officially ended in June 2009, although the unemployment rate continued to rise for six more months. It hit 10 percent in late 2009 before a slow descent to 7.4 percent last month.

"We applaud the president's discussion about manufacturing. I think the president never misses a chance to talk about the importance of manufacturing," said Chad Moutray, chief economist at the National Association of Manufacturers. He also praised the administration's efforts to push two new free-trade pact negotiations, one with Europe and the other with Asian trading partners.

But, Moutray added, "We've had really disappointing numbers so far this year. Hopefully, they'll start to turn around as we move into the second half. ... Next year, it's going to be almost impossible for us to meet the president's goal of doubling exports."

A new industry report on the level of manufacturing activity showed an expansion in July. But the improvement likely won't move the needle much toward Obama's export target.

"The more products we make and sell to other countries, the more jobs we support right here in America," Obama said on Jan. 27, 2010, in his State of the Union address. "So tonight, we set a new goal: We will double our exports over the next five years, an increase that will support 2 million jobs in America."

U.S. exports did rise to $2.2 trillion in 2012. But then came slowdowns in Europe, China and Brazil.

In May, the most recent trade figures available, monthly U.S. exports slipped 0.3 percent, to $187.1 billion. New trade numbers are out next week.

"You can look at the export slowdown in one or two ways. You can say, 'Well, job growth hasn't been as good in the last 12 months.' But what I would say is that we haven't created 500,000 (manufacturing) jobs like this since the '90s," said White House economic adviser Gene Sperling, using that familiar job-creation number.

"I feel like the wind is at our backs. Like a lot of things in life, good things happen when you seize opportunity, when you have a trend going your way and you seize and expand on it," Sperling said.

Treasury Secretary Jack Lew suggests economics is "kind of collective psychology. When people feel better about the future, they act better and the economy picks up. When people worry, it also has an effect on the economy."