Much of the extra methane, also called natural gas, seems to be coming from livestock, including manure, belches, and flatulence, as well as leaks from refining and drilling for oil and gas, the study says. 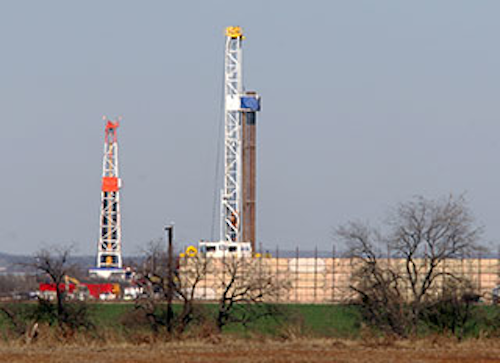 WASHINGTON (AP) -- The United States is spewing 50 percent more methane — a potent heat-trapping gas — than the federal government estimates, a new comprehensive scientific study says. Much of it is coming from just three states: Texas, Oklahoma and Kansas.

That means methane may be a bigger global warming issue than thought, scientists say. Methane is 21 times more potent at trapping heat than carbon dioxide, the most abundant global warming gas, although it doesn't stay in the air as long.

Much of that extra methane, also called natural gas, seems to be coming from livestock, including manure, belches, and flatulence, as well as leaks from refining and drilling for oil and gas, the study says. It was published Monday in the Proceedings of the National Academy of Science.

The study estimates that in 2008, the U.S. poured 49 million tons of methane into the air. That means U.S. methane emissions trapped about as much heat as all the carbon dioxide pollution coming from cars, trucks, and planes in the country in six months.

That's more than the 32 million tons estimated by the U.S. Environmental Protection Administration or the nearly 29 million tons reckoned by the European Commission.

"Something is very much off in the inventories," said study co-author Anna Michalak, an Earth scientist at the Carnegie Institution for Science in Stanford, Calif. "The total U.S. impact on the world's energy budget is different than we thought, and it's worse."

EPA spokeswoman Alisha Johnson said her agency hasn't had time to go through the study yet, but hopes it will help "refine our estimates going forward."

While the world has a good handle on how much carbon dioxide is pumped into the air, scientists have been more baffled by methane emissions. They have had to use computer models to estimate how much methane is going into that air.

This study, however, was based on nearly 13,000 measurements from airplane flights and tall towers, the most used in any such research.

The information was collected in 2008, right at the beginning of the natural gas boom from hydraulic fracturing. So these measurements, which will be repeated for 2012, don't include much impact from fracking, Michalak said. Studies recently have shown conflicting results about how much methane escapes during fracking and other forms of fossil fuel drilling.

Outside experts praised the study. Robert Howarth at Cornell University called "it very compelling and quite important. This is the most comprehensive study yet."

Michalak said because of the way they measured methane — just looking for it in the air as opposed to tracking it from a source — it is hard to say what is putting more methane into the air. But she said by looking at concentrations — especially within Texas, Oklahoma and Kansas — the scientists have a good idea: Cows, oil and gas.

Nearly one-quarter of the U.S. methane emissions came from those three states. Texas is by far and away the No. 1 state for refineries that turn oil into gasoline. Texas and Oklahoma have been big oil and gas drilling states and Kansas is a big cow state.

While burps and flatulence are part of the methane emission from cattle, University of California Santa Barbara professor Ira Leifer said a bigger factor is manure.

"If you shovel it into an artificial lagoon you are creating the perfect production for methane, but it cuts down on the smell and your neighbors complain less," he said.