Orders For Durable Goods Drop In May 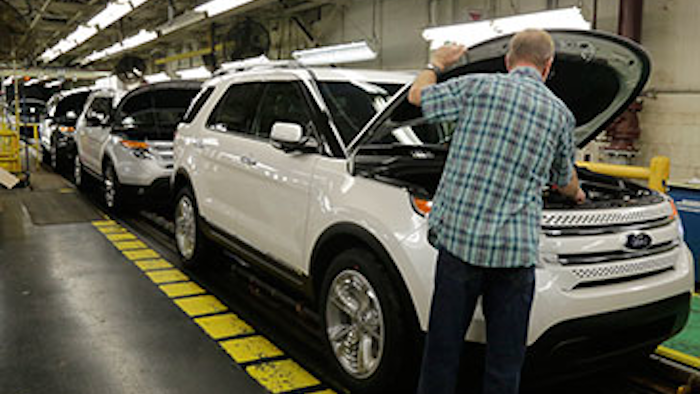 The gains outside of military goods suggest business spending is picking up, which could give the economy a much-needed boost.

The Commerce Department said Wednesday that orders, excluding defense, rose 0.6 percent in May, after falling 0.8 percent in April. Orders for core capital goods, which reflect business investment, increased 0.7 percent, after a 1.1 percent drop.

Factories reported higher demand for steel and other metals, computers, and autos. Orders for defense equipment surged in April, so the sharp fall in May isn't a total surprise. Durable goods are items expected to last at least three years.

The figures come as a separate report showed that the U.S. economy contracted sharply in the first three months of the year, largely because of bad weather. The economy shrank 2.9 percent at an annual rate in the first quarter, the worst showing since the first quarter of 2009, in the depths of the Great Recession.

But most economists expect growth has resumed in the current quarter, partly because of rising manufacturing output. Most analysts expect the economy will expand by 3.5 percent in the April-June quarter.

Factory production rose at a steady pace last month, according to the Federal Reserve, as manufacturers cranked out more cars, machinery, furniture, computers and appliances. More output of those goods points to rising demand from consumers and businesses.

And auto sales reached a nine-year high in May as Americans ramped up purchases of SUVs and pickup trucks.

A survey by the Institute for Supply Management, a trade group of purchasing managers, found that manufacturing expanded faster in May than in April. A measure of new orders also rose, pointing to further growth in output in the coming months.

Manufacturers are hiring more to keep up with demand. Factories added 10,000 positions in May, and the average work week for manufacturing employees grew.

Cliff Waldman, senior economist with Manufacturers Alliance for Productivity and Innovation (MAPI), offered his analysis on both durable goods and GDP:

“The May durable goods report adds to the sense that the rebound from the brutal first quarter of this year, in which real GDP contracted by nearly 3 percent, is disappointing at best,” said Cliff Waldman, senior economist for the Manufacturers Alliance for Productivity and Innovation (MAPI). “Total new orders contracted by a sharp 1 percent after a 0.8 percent increase in April. Excluding the transportation equipment category, whose short-term volatility is due to the bulky nature of large transportation products, total new orders contracted by 0.1 percent after a modest 0.4 percent gain in April. The demand data for industry sectors that create inputs for a wide range of goods supply chains testify to the uneven nature of manufacturing activity. Primary metals demand increased by a strong 1.9 percent, while fabricated metal products demand increased by 0.3 percent and machinery demand fell by 0.3 percent. Alarmingly, fabricated metal products demand is down by 3.2 percent on a year-over-year, year-to-date basis.

“While total new orders remain moderately healthy on a year-over-year, year-to-date basis, at 4.2 percent growth, the current concern is the direction of the economy and the manufacturing sector after the very difficult early months of 2014,” Waldman added. “While some of the 2.9 percent GDP contraction can be attributed to a very taxing and persistently stormy winter, the magnitude of the contraction suggests that the economy’s weaknesses remain well in place more than five years after the end of the worst downturn of the post–World War II era.

“A noteworthy weakness has been the failure of business equipment spending to engage in an expected post-recession rebound” he noted. ”Capital spending has been atypically weak since about 2000. During the first quarter of 2014, business equipment spending contracted by 2.8 percent. While the durable goods data do point to a second quarter bounce, it does not look like it will be a particularly strong one. The past two months of data for new orders for nondefense capital goods excluding aircraft, a proxy for business equipment spending, have been sluggish, with a 1.1 percent contraction in April and a 0.7 percent increase in May.

“The muted performance of capital spending reflects fundamental uncertainty about the direction and strength of the U.S. economy after five years of historically weak post-recession performance. For the manufacturing sector, the state of the world economy remains a worry as well,” Waldman said. “The 8.9 percent contraction in export demand during the first quarter of 2014 was an unwelcome sign in this regard and reinforces a range of regional concerns, from a deflation threat in Europe to a murky outlook for China and broader concerns about the entire developing world. The U.S. economy will likely resume a path of moderate growth for the balance of this year and into 2015, while manufacturing will continue to show moderate and possibly accelerating growth. But the risks for the economy and for the factory sector are clearly to the downside.”

Drone Display Shows Potential Use From Crimes To Crops