A chemical explosion Tuesday at a General Motors metal-stamping plant in Indiana killed a contractor and injured several others, authorities said. 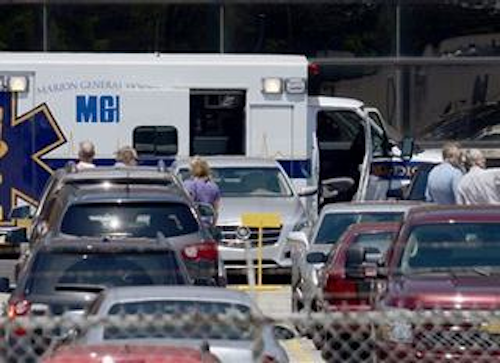 Marion General Hospital was treating five other people with non-life threatening injuries, hospital spokeswoman Ann Vermilion told the Marion Chronicle-Tribune. However, GM issued a statement saying four employees were under observation for non-life-threatening conditions at the hospital and that four others were transported there, but required no treatment.

"The situation is contained. Everybody has been evacuated," GM spokeswoman Stephanie Jentgen said in a telephone interview.

The explosion involved a chlorine dioxide tank, and the chemical continued spilling out after the explosion, Marion Fire Chief Paul David said. A hazardous materials crew contained the spill, and firefighters were rinsing off the skin of everyone who may have come into contact with the chemical. If inhaled, the chemical can cause lung problems and can irritate the skin and eyes.

Marion Mayor Wayne Seybold went to the scene and talked with GM officials.

"This is heartbreaking for our community," Seybold said.

"The safety of our employees is very important to us and an investigation of the incident is under way. Counselors have been deployed to the site and we will provide other employee services as needed," the statement said.

The plant about 60 miles northeast of Indianapolis employs about 1,600 workers and provides blanks, stampings and sheet metal assembly for vehicles to GM assembly plants across North America, according to GM's website.

WRTV-TV reported that the Indiana Department of Labor cited the plant in December 2009 for a single serious safety violation. The plant paid a penalty of $845 and completed an abatement requirement. The plant has not had any violations since.