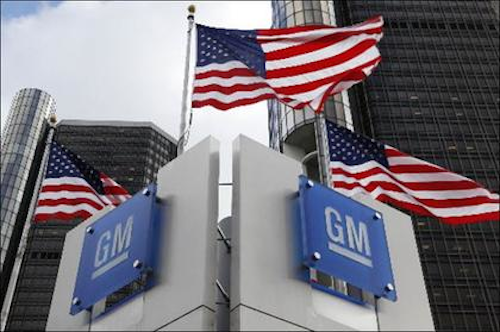 The July-September quarter was the first this year without significant charges for recalls. GM has issued 75 recalls in 2014 covering more than 30 million vehicles, costing the company more than $2.8 billion.

Without $331 million in one-time items, GM would have made 97 cents per share, exceeding Wall Street's expectations. Analysts polled by FactSet expected 95 cents.

In North America, revamped pickup trucks and SUVs helped to push GM's pretax profit up 12.1 percent to just over $2.4 billion. The company's profit margin — the amount of revenue it gets to keep — hit 9.5 percent, the fifth-straight quarter of growth. In China, pretax profit rose 14 percent to $484 million.

"The new trucks and SUVs are more profitable than the ones they replaced. That certainly helps from a profit perspective," he said.

GM sold 884,000 vehicles in North America during the quarter, an increase of 9.4 percent.

But the company's loss in Europe, including Russia, grew 63 percent to $387 million. GM also lost $32 million in South America. But Stevens said both regions improved from previous quarters as cost cuts took hold. The company expects to record a pretax profit in Europe during 2016.

Stevens said GM spent about $700 million on recall repairs during the third quarter, although the expenses were booked during the first half of the year. The biggest recall expense stems from the call back of 2.6 million small cars to fix faulty ignition switches that have been linked to 29 deaths. GM has hired compensation expert Kenneth Feinberg to pay victims and their families and expects to pay $400 million to $600 million in claims.

GM said the quarter included $200 million in restructuring costs, mainly for the closure of an assembly plant in Germany.