A Look At BlackBerry Maker Research In Motion

Research In Motion Ltd. is changing its name to BlackBerry as the Canadian company develops two new phones with a modern operating system called BlackBerry 10. RIM is counting on the new system to help with a turnaround. Here's a look at recent developments as the company struggles to regain market share lost to Apple's iPhone and devices running Google's Android operating software. 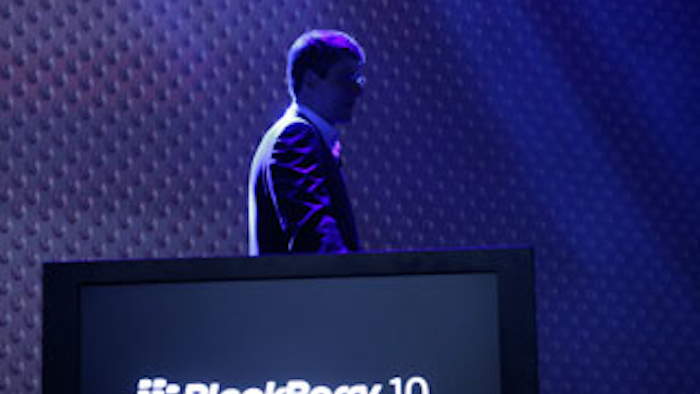 Research In Motion Ltd. is changing its name to BlackBerry as the Canadian company develops two new phones with a modern operating system called BlackBerry 10. RIM is counting on the new system to help with a turnaround. Here's a look at recent developments as the company struggles to regain market share lost to Apple's iPhone and devices running Google's Android operating software.

Sept. 15, 2011: RIM says it has sold far fewer PlayBook tablet computers than it expected, as the company reports a sharp drop in net income and revenue in the fiscal second quarter.

Oct. 25: RIM says it is delaying the launch of an upgraded operating system for the PlayBook until February, saying it isn't up to its standards yet. The company also says the new version initially won't have the popular messaging service BlackBerry Messenger. It's the third delay announced since the features were promised in April.

Dec. 2: RIM says it is writing off much of its inventory of PlayBook tablets after it had to sell them at a deep discount. The model originally priced at $500 now costs $200. The company says it's taking a pre-tax charge of $485 million in the just-ended quarter. RIM also says it will sell fewer BlackBerrys in the holiday quarter than in the one that just ended. It also says it won't meet full-year earnings guidance of $5.25 to $6 per share, the third cut in a row.

Dec. 6: RIM says "BlackBerry 10" will be the new name for its next-generation system after the company loses a trademark ruling on its previous name, BBX.

Dec. 15: RIM says new phones deemed critical to the company's future won't be out until late 2012. The company says the BlackBerry 10 phones will need a highly integrated chipset that won't be available until mid-2012, so the company can now expect the new phones to ship late in the year. The company also says BlackBerry sales will fall sharply in the holiday quarter compared with the three months that ended Nov. 26. RIM says it would only ship between 11 million and 12 million BlackBerrys in the fourth quarter, down from 14.1 million in the third quarter.

Jan. 22, 2012: RIM founder Mike Lazaridis and long-time executive Jim Balsillie announce they will step down as co-CEOs. Thorsten Heins, a chief operating officer who joined RIM four years ago from Siemens AG, was named as their replacement. Lazaridis and Balsillie remain on the board.

Feb. 21: RIM finally releases an upgraded operating system for its PlayBook. The free upgrade allows for built-in email, calendar and contacts on the tablet — features promised within 60 days after the PlayBook's launch last April. The PlayBook had received negative reviews because it launched without an email program and the popular messaging service BlackBerry Messenger. The new version still doesn't include the messaging service.

March 29: RIM says Balsillie has resigned from its board, and two top executives are leaving. RIM also writes down the value of its product inventory again as the company reports a loss of $125 million, its first quarterly loss since fiscal 2005. Heins doesn't rule out a sale, but he says it is not the main direction of the strategic review he's overseeing.

April 26: Newest board member of RIM says a turnaround could take three to five years. Prem Watsa, RIM's third-largest investor, says he sees his investment in the company as a long-term one, adding that RIM's fortunes won't be reversed soon.

May 1: RIM unveils a newly designed smartphone prototype powered by its upcoming BlackBerry 10 system. The prototype BlackBerry has a touch screen, but no physical keyboard like most BlackBerry models. No update was given on the new system's launch date.

May 2: Company stresses that while the prototype has no physical keyboard, RIM will continue to make some models with one.

May 29: RIM says it will have an operating loss in the current quarter and significant layoffs. The company says it has hired J.P. Morgan and RBC Capital Markets to help evaluate various strategies, including opportunities to partner with other companies and to license software.

June 20: RIM says it has started laying off employees as part of a restructuring plan aimed at saving about $1 billion in 2012.

June 21: Company says the first BlackBerry device running BlackBerry 10 will not have a physical keyboard, only a touch-screen one. Ones with hard keyboards will eventually be made, but the company declines to say when.

June 28: RIM says it's cutting 5,000 jobs, or about 30 percent of its workforce, and delaying the launch of BlackBerry 10 yet again, to the first quarter of 2013. It also reported worse results for its latest quarter, which ended June 2, than analysts had expected.

July 10: At RIM's annual shareholders meeting, Heins asks disgruntled investors for patience as the company develops new devices to rival the iPhone and Android smartphones. He says the past year has been very difficult for RIM, and he says the company is "around the clock" to get BlackBerry 10 out.

Nov. 12: RIM says it will hold an official launch event for BlackBerry 10 smartphones on Jan. 30.

Nov. 28: Nokia Corp. says that it is suing RIM for breach of contract in Britain, the United States and Canada over cellular patents the two companies agreed on nine years ago. RIM says it "will respond to Nokia's petitions in due course."

Nov. 29: RIM's stock rises after Goldman Sachs upgraded the company's shares, saying there's a "30 percent chance" that BlackBerry 10 smartphones will be a success.

Dec. 20: RIM announces that it lost subscribers for the first time in the latest quarter, as the global number of BlackBerry users dipped to 79 million. RIM also says it is changing the way it charges service fees, putting an important source of revenue at risk. Only subscribers who want enhanced security will pay fees under the new system.

Jan. 30, 2013: RIM announces it will change its name to BlackBerry and trade under the ticker symbol "BBRY" on the Nasdaq Stock Market. It comes as RIM unveils its first two phones with the new BlackBerry 10 system after lengthy delays. The Q10 will have a physical keyboard, while the Z10 has only a touch-screen keyboard. U.S. availability isn't expected until March for the Z10 and at least April for the Q10.

Tuesday: The Z10 model goes on sale in Canada.